Thai protesters have vowed to nullify the results of the weekend’s elections. On Sunday, demonstrators forced polling booths to close in Bangkok and southern Thailand, angering registered voters. 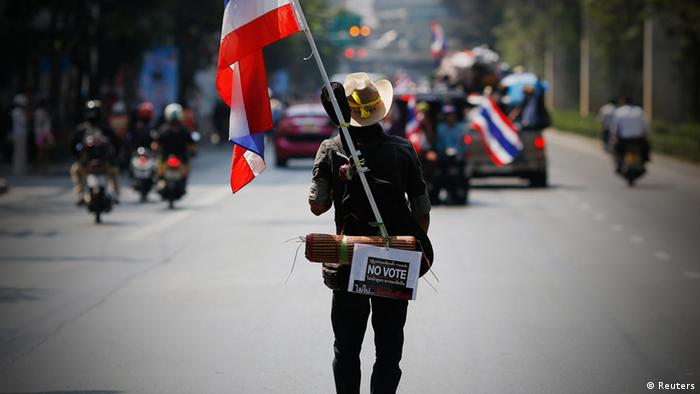 On Monday, anti-government protesters vowed to press on with street rallies aimed at ousting Prime Minister Yingluck Shinawatra of the Puea Thai party after a disrupted election failed to cut a path through the kingdom's political protests.

"We are not giving up the fight," protest leader Suthep Thaugsuban said on Monday. "We will still keep fighting. Our mission is to keep shutting down government offices, so don't ask us to give those back."

As a result of the protesters' successful bid to shut down some polling places on Sunday, the government cannot fill all vacant parliament seats and must hold a series of by-elections to complete voting, potentially extending Thailand's political paralysis for months.

After disrupting the voting, protesters said they will now fight the election on several grounds, including the law that requires the government to complete voting on a single day.

The opposition Democrat Party, which backs the protesters and boycotted Sunday's election, said on Monday that it would study legal justifications to invalidate the vote.

"It's clear that this election must be nullified," Akanat Promphan, the spokesman for the People's Democratic Reform Committee (PDRC), the main protest group, told reporters at the start of the march on Monday.

The struggle to hold the polls was the latest twist in a three-month conflict that has split the country between Yingluck supporters and opponents who say her government is too corrupt to rule. Demonstrators have occupied major intersections in Bangkok and forced government ministries to shut down and work elsewhere.

On Monday, Suthep, a former opposition lawmaker, said that the PDRC would close two of its Bangkok protest sites and ask crowds to consolidate at five other locations, mostly in the business center of the capital. The new plan could cause further disruption in the center of Bangkok, where major intersections in the Silom and Sukhumvit business districts and Ratchaprasong shopping district, home to the city's upscale malls, have already been closed.

The protesters want to replace the government with an unelected council, saying such a body is needed to rewrite political and electoral laws to combat corruption.

Yingluck has refused to step down on the grounds of her government's 13-percent winning margin in 2011 elections, also offering Sunday's snap elections instead of resignation which the opposition chose not to compete in. She said she would consider reforms, but called the council proposed by protesters unconstitutional and undemocratic.

Protests in 2006 led to the coup that ousted Yingluck's brother, former Prime Minister Thaksin Shinawatra. The ex-premier fled to Dubai, where he remains to avoid corruption charges.