Protesters call for mass rally as Egypt′s cabinet offers resignation | World | Breaking news and perspectives from around the globe | DW | 22.11.2011

With dozens dead in clashes with police - and just one week until elections - Egypt's military-appointed civilian government has offered to resign. Protesters say it's not enough and have called for a mass rally. 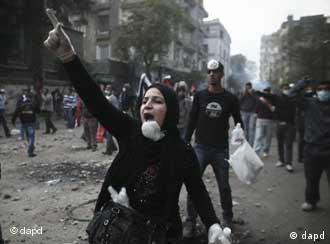 Clashes between police and protesters have killed dozens

Egypt's political future hung in the balance on Tuesday after the army-appointed cabinet offered its resignation amid deadly clashes between security forces and protesters demanding the military cede power.

Hundreds of protesters arrived in Cairo's central Tahrir Square early Tuesday, where over 100,000 demonstrators had gathered the previous day. They were responding to calls for a mass rally to pile pressure on military rulers.

The Supreme Counicl of the Armed Forces was reported to be holding talks with political leaders after the cabinet tendered its resignation late on Monday.

"The government of Prime Minister Essam Sharaf has handed its resignation to the [ruling] Supreme Council of the Armed Forces," cabinet spokesman Mohammed Hegazy said in a statement.

The SCAF did not immediately announce whether it would accept the mass resignation, and media reports offered conflicting answers. If accepted, Sharaf's resignation threatens to derail the parliamentary elections, scheduled for November 28.

Egypt's Health Ministry reported at least 24 deaths and 1,750 wounded as a result of the clashes. 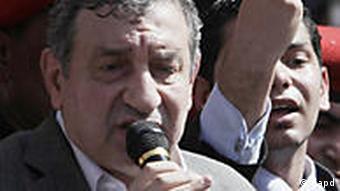 Many see Sharaf's government as a mere puppet for the military

After the announcement of Sharaf's offered resignation, demonstrators quickly resumed their chants of "the people want the ouster of the field marshal," referring to Field Marshal Hussein Tantawi, the head of the SCAF, which has ruled the country since the authoritarian President Hosni Mubarak was toppled in February.

But many protesters say the parliamentary elections will not produce democracy. Protest organizers have vowed to continue their demonstrations.

They are calling for the military gives up its rule, which it says it will not renounce until the presidential elections it has vaguely slated to take place in late 2012 or early 2013.

Many viewed Sharaf's government as a mere facade for the military, whom many activists accuse of acting as abusively as Mubarak's regime and of intending to maintain their grip on power. 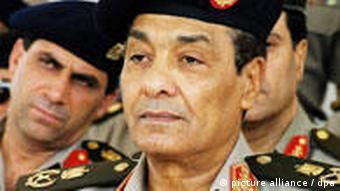 Protesters continued to chant for Tantawi to step down

UN Secretary-General Ban Ki-moon was joined by German Foreign Minister Guido Westerwelle in calling for an end to the violence on Monday.

"The human rights balance sheet for SCAF shows that after nine months in charge of Egypt, the aims and aspirations of the January 25 revolution have been crushed," the report said.

Meanwhile in a statement, 140 Egyptian diplomats called for "an end to the violence and attacks by security forces against peaceful protesters." 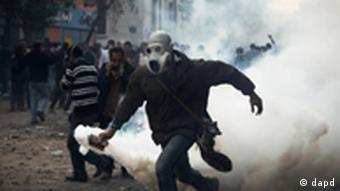 The international community has condemned the violence

The SCAF has vowed to press forward with its timetable for elections, despite calls for a delay from several prominent intellectuals and political figures in the country.

Among them was Nobel Peace laureate Mohamed ElBaradei, who on Sunday had called on the cabinet to resign.

"Power is now in the hands of the military council, which is not qualified to run the country, and the government, which has no authority," he said on a televised talk show.

"We want to see the powers of the military council given completely to a civilian, national unity government, and the military goes back to just defending the borders."

Less than a week before the first parliamentary elections in Egypt since the ouster of Hosni Mubarak, Amnesty International has released a report accusing the interim government of human rights violations. (22.11.2011)

Western nations led by the US appear to be hedging their bets on the true intentions of Egypt's military rulers as the crackdown in Cairo continues unabated. A fear of alternative leadership may be holding the West back. (21.11.2011)

Continued efforts by security forces to clear Tahrir Square will only result in more deaths and embitterment among the protestors, says international relations expert Klaus Larres who is witnessing the events in Cairo. (21.11.2011)