Protesters break into Syrian embassies across Europe | Europe| News and current affairs from around the continent | DW | 09.10.2011

Demonstrators have been removed from the Syrian embassy in Berlin after breaking in to protest against the Assad regime. There were similar incidents in Syrian embassies around Europe. 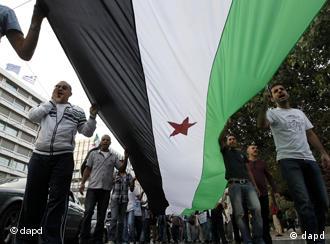 Protests have been held at Syrian embassies throughout Europe

Protesters attempted to force their way into Syrian embassies across Europe over the weekend in an apparent response to the assassination of a leading Kurdish political figure who was a member of the opposition Syrian National Council (SNC).

A group of about 30 demonstrators stormed the Syrian embassy in Berlin early on Sunday and confronted the ambassador, according to the police.

The break-in followed earlier demonstrations outside the embassy on Saturday. No one was hurt or arrested, a police spokesman told the news agency AFP.

The protesters broke through a fence and rushed inside to confront the ambassador, who also lives at the embassy.

The police said embassy staff reacted very calmly, and the protesters were merely removed from the scene. There was no violence or arrests.

The police have since strengthened their presence around the embassy.

In Hamburg, 30 protesters gathered outside the Syrian consulate early on Sunday, with some of them managing to break into the ground floor and spraying graffiti on the building's walls, according to police spokeswoman Karina Sadowsky. 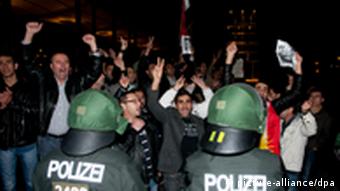 The death of Tammo has sparked outrage

Earlier, five protesters were arrested in Switzerland late on Saturday after forcing their way into Syria's mission to the United Nations in Geneva, according to police spokesman Patrick Puhl.

And in London, British police said they had arrested seven protesters outside the Syrian embassy on Saturday, including three who scaled the building and waved the Kurdish flag from the rooftop. Around 50 to 60 people had gathered outside the embassy to protest, according to police.

The rash of embassy protests followed a long day of violence in Syria, after security forces opened fire on a funeral for Kurdish opposition leader Mashaal Tammo, killed on Friday by masked gunmen in his home in north-eastern Syria.

The Syrian government, meanwhile, threatened retaliation against nations who recognized the SNC, formed in Istanbul, Turkey in August to bring together opposition groups including the activist network Local Coordination Committees (LLC), the banned Muslim brotherhood as well as Kurdish and Assyrian groups.

"We will take significant measures against any country that recognizes this illegitimate council," Syrian Foreign Minister Walid Muallem said.

"There are groups carrying out acts of violence in Syria and who have killed a great number of martyrs," Muallem said. "The West speaks of a peaceful revolution and does not admit these groups exist, but arms them anyhow."

Tens of thousands of mourners have taken to the streets in Syria to protest the assassination of a Kurdish opposition activist. European officials have called for the perpetrators of the killing to be held accountable. (08.10.2011)

Turkey underlines its opposition to the Syrian government

Turkey is conducting military exercises on its border with Syria. It is also threatening Damascus with sanctions over the violent government crackdown on dissent, but their impact is likely to be limited. (06.10.2011)