Press Review: Germany′s Troubled Election | News and current affairs from Germany and around the world | DW | 19.09.2005

International newspapers have mixed reactions to the election, but disappointment and confusion prevail. 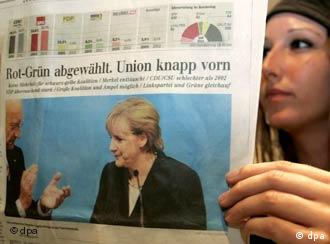 Foreign papers are just as confused as German ones

The majority of foreign newspapers see the Sept. 18 German election results as a clear defeat for Angela Merkel. DW-WORLD has opinions from the international Press on the elections.

The German are tending to the left. They appear to prefer moderate reforms in the style of the Agenda 2010 to a radical change of the social welfare system which the right is striving after. The election results make a grand coalition more likely. Indeed such an experiment in the 1960s was shown to be a mistake, but a grand coalition has practically been in power of late since the Christian Democrats control the Bundesrat (the upper house of parliament). Therefore, it seems to be quite imminent to institutionalize such a coalition in the government. For the European Union, it is essential that the strongest economic power acquires a government that puts the powerful engine in gear.

Even if the voters prepared an end for Red-Green yesterday, they didn't clearly say what they wanted. A black-yellow coalition of Christian Democrats and Free Democrats hasn't got a majority, so these parties now have to look for a third partner. The election means -- more than for Gerhard Schröder -- a bitter defeat for the party of the chancellor candidate Angela Merkel and her Bavarian coalition partner Edmund Stoiber (sister party Christian Social Union Chairman). (. . . ) The uninspiring head of the German Christian Democrats could not for one moment during the 7-week campaign convince the German voters that her party offered a positive alternative. For that she was punished by the voters.

Germany was plunged into uncertainty last night when the leaders of the two main parties claimed they could become chancellor after neither won a majority in the general election. The result was a blow to the conservative challenger, Angela Merkel, whose party started the campaign with a 21-point lead. Although Mrs. Merkel could still become the country's new leader, she can now probably only do so as part of a "grand coalition" with Gerhard Schröder's Social Democratic party. (...) The outcome suggested that neither side was in a strong position to bring about reforms to pull Germany out of its economic stagnation. (...) Europe's largest economy can now expect "a period of prolonged confusion" as both Merkel and Schröder attempt to forge coalitions to govern Germany.

The result is what none of the German parties wanted and what all governments in Europe feared. In Germany the intermingled fears of economic fallout and the loss of the social welfare state have prevailed -- with the result that none of the two coalitions proposed to the voters has a majority large enough to build a government. (. . . ) Between those who didn't really win and those who didn't really lose, it will be Germany and Europe who have to pay.

The brilliant election campaigner Schröder has been unelected. He will nonetheless be remembered as one who could secure the electoral standing of his party in the government after years of losses. The now looming grand coalition must convince the voters of the necessary reforms. Such reforms will require directness and being "close" to the people. Schröder lacks the directness; Merkel lacks the closeness.

It was a bad omen when Angela Merkel, the candidate of the conservative CDU, chose the Rolling Stones song "Angie" as her election song. In reality, it's a song about disappointment. "All dreams we held so close seem to all blow up in smoke", says the song and that's almost exactly what the CDU experienced in the election, as the Social Democrat Gerhard Schröder, who for the past seven years has been the German Chancellor in a style like that of Bill Clinton, managed a noteworthy comeback. The confused result, with which neither of the big parties can bring about a stabile majority, means that Germany won't be able to decisively reform its cumbersome social welfare state in the near future. (...) The sick man of Europe will probably remain bedridden for some time.

Just the same as the composition of the new coalition will be, the results have no great significance from the Isreali and Jewish perspective because what's the difference between special relationships and relationships which are a precious gift. Chancellors come and go and Israelis, who have gotten used to big explanations, are just yawning. The "special" has become the norm and explanations have become cliches. Great words don't merit headlines anymore. The chancellors in Germany can change, but the policy of Israel and the Jews in the world will remain the same toward them. Everything is obvious, boring. And that is in principle the most interesting.

The Times (of London): Germany in turmoil

Merkel said that she had "obviously wished for a better result," but insisted that Herr Schröder’s party had been voted out of power. She said she would negotiate with every other party except the communist Left Party. (...) Herr Schröder, who had seemed to be heading for a crushing defeat just a few weeks ago, claimed that his barnstorming campaign had achieved what had seemed "completely impossible" and he too would consider forming a coalition with any party except the radical Left Party. (...) The results came as a blow to those such as Tony Blair who were hoping that a convincing victory for Frau Merkel would reshape Europe and reinvigorate the continent’s largest economy.

The result of the German polls is a big surprise. Contrary to pollsters' predictions, Germans didn't vote for a change in government. A grand coalition is the only way out of the mess, says Deutsche Welle's Uta Thofern. (Sept. 19, 2005)

Elections in Europe's largest nation were closely watched in the media, both at home and abroad. Here's a sample of what some foreign correspondents and German papers had to say about the unexpected result. (Sept. 18, 2005)

Senegal's electoral commission has said the ruling coalition has failed to hold on to its absolute parliamentary majority.