The directorate of the Charlemagne Prize has announced that Martin Schulz is to receive the next award in 2015. The prestigious prize is given to people who work to strengthen Europe and promote European values. 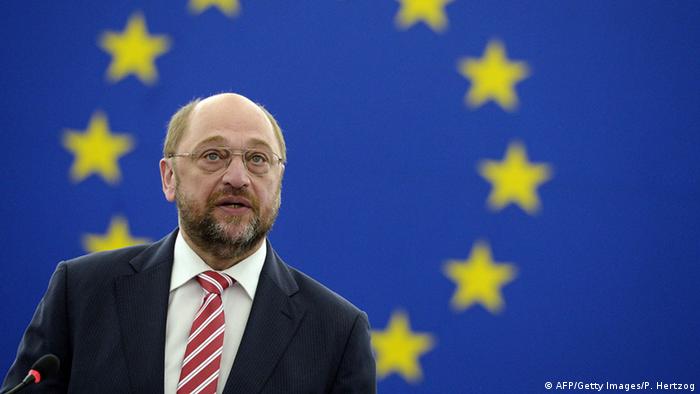 Martin Schulz will receive the International Charlemagne Prize of Aachen, or Karlspreis 2015, the prize's directorate announced on Saturday.

President of the European Parliament, the 58-year-old German politician will be awarded the prize in a ceremony on May 14, 2015 for his efforts to strengthen democracy in Europe.

"Schulz is today an outstanding representative for the vitalization of European democracy," the directorate said. Schulz has been a key figure in promoting European parliamentarianism and democracy legitimization.

When he heard he would receive the prize in 2015, Schulz said it was "emotionally moving. I am grateful." He added that Europe was a goal that had to be worked for and that the prize was encouragement for this: "I believe more than ever that we need Europe - economically, ecologically, politically, socially and culturally." The ceremony will be held in Aachen's historic Coronation Hall.

Jürgen Linden, spokesman of the Charlemagne Prize Directorate, said European populations had lost trust in Europe over the past few years and that Schulz was symbolic for the conviction that Europe needed to emerge from the crisis with more security, stability and orientation than ever. "Martin Schulz is very close to the people," Linden said.

A number of people and institutions have been awarded the prestigious prize, among them Germany's first chancellor after WWII Konrad Adenauer, Winston Churchill, Salvador de Madariaga, Beatrix of the Netherlands, Roman Herzog, Tony Blair, Bill Clinton, John Paul II, Jean-Claude Junker, along with the Euro and the European Commission. This year's prize was awarded to Herman Van Rompuy, the first president of the European Council.

The Karlspreis was named after Charlemagne, ruler of the Frankish Empire and founder of the Holy Roman Empire. It has been awarded since 1950 in Aachen, also known as Aix-la-Chapelle, where Charlemagne lived and was laid to rest after his death in January, 814. It is awarded to people who have worked to promote the ideals of Western Europe through literary, scientific, economic or political endeavors.

The Charlemagne Prize ceremony offered three heads of government from former Soviet republics the opportunity to express their desires to strengthen ties to the European Union. This is not likely to have pleased Russia. (30.05.2014)

EU Commissioner for Enlargement Stefan Fule has expressed his support for Ukraine’s EU accession in response of the founding of the Eurasian Economic Union. But some question when the EU's backing came at the right time. (31.05.2014)