Romania's parliament has impeached President Basescu. For his opponent, Prime Minister Ponta, this is a major victory. But the European Union is worried about democracy and the rule of law in Romania. 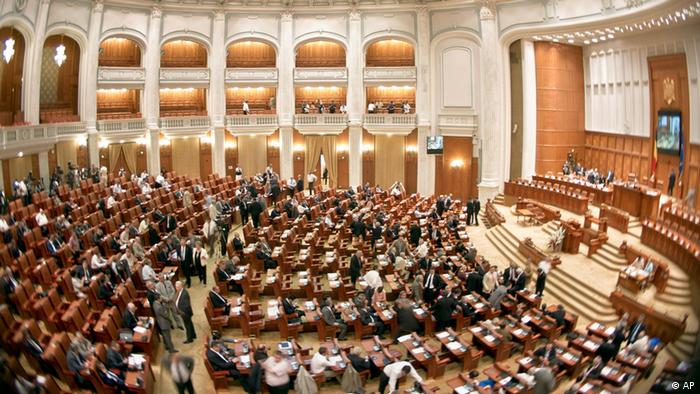 The Romanian Parliament on Friday evening decided to suspend President Traian Basescu from office. On July 29, a referendum will decide whether Basescu loses his job. Until then, Senate President Crin Anotescu, the second most powerful man in Romania, will take over the president's powers. Some 256 deputies and senators voted to impeach Basescu, with 114 opposed. This was a clear majority, as only 217 votes were required.

The leftist Social-Liberal Union of Prime Minister Victor Ponta, which has been in power since May, accused Basescu of having exceeded his authority. He had usurped government powers, pressured the judiciary, failed to respect the requirement of impartiality and tried to establish a presidential system. The constitution gives the president responsibility for, among other things, foreign and defense policy, and nominating a prime minister. The office is otherwise primarily ceremonial.

Basescu too active as president? 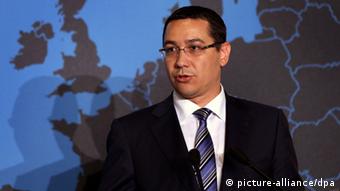 During his time in office, Traian Basescu was able to influence austerity policy due to his close relations with the conservative Liberal Democratic Party. "He has said from the beginning that he wanted to be an active president," Berlin-based political scientist Anneli Ute Gabanyi said in an interview with DW. "He did not want to be limited to a ceremonial role, but wanted to engage in politics and shape policy." This became his undoing - not least because of the shifting balance of power.

Ponta's government has been constantly trying to expand its powers. It recently deposed the presidents of both houses of parliament, members of the Liberal Democratic Party. "The power struggle is in full swing between the president and the prime minister," Gabanyi said. Parliament is now able to reverse many of the laws and appointments that were made under Basescu.

The German government is concerned about the events in Romania - and especially the curtailment of the rights of the Romanian Constitutional Court in connection with the proceedings against Basescu. Only two days before the vote in parliament, Ponta issued an emergency decree that the constitutional court was no longer allowed to block parliamentary decisions such as the impeachment of Basescu. "Something like this undermines the rule of law of a country," said German government spokesman Steffen Seibert.

"It is particularly bad because it is a perversion of the rule of law," Peter Mario Kreuter of the Institute for East and Southeast European Studies in Regensburg told DW. "There's a consttution and it lays out the way that things should be done when, for instance, a president is impeached. Now, this has been drastically simplified – bypassing the official regulations." 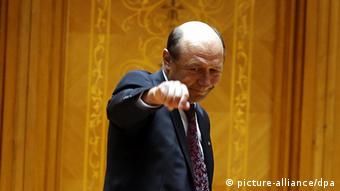 Basescu is himself accused of being 'anything but a good democrat'

German Foreign Minister Guido Westerwelle in a recent interview questioned the progress of Romania's further EU integration process. "Serious violations of the common European value system would also raise questions about Romania being ready for the last steps of full integration into the European Union."

Criticism from the US and the Council of Europe

The events in Romania have also drawn criticism from the US. State Department. Spokeswoman Victoria Nuland said that, in light of the power struggle between Ponta and Basescu, Washington saw the separation of powers as being threatened. "We are concerned about recent developments occurring in Romania, our NATO ally and partner, which threaten democratic checks and balances and weaken independent institutions, such as the courts. The United States stands with our EU partners and urges Romania to uphold and protect the common values and principles that unite the European and trans-Atlantic community of nations," she added.

The Council of Europe has announced that it would look at the legitimacy of the suspension. The so-called Venice Commission, an independent advisory group on constitutional matters, has been asked to see whether the recent developments in Romania are in line with the principles of democracy and the rule of law, the council's secretary general, Thorbjoern Jagland, said on Saturday. EU Commission President Jose Manuel Barroso is scheduled to meet with Victor Ponta next Thursday in Brussels.

Yet there's also criticism of Basescu. Austrian member of the EU Parliament, Hannes Swoboda, told German public radio that he was against "one-sided political statements." For years, Basescu abused his powers without everybody keeping silent about it, Swoboda said.

Political scientist Gabanyi told DW that Basescu had lost a lot of his support both among politicians and the people over his policy of strict budget cuts. Critics also accuse Basescu of harboring discriminating views of minorities. In Gabanyi's view, Basescu is now being treated in a way he himself had used in the past.

Kreuter adds that "Basescu is anything but a good democrat. He is at least as corrupt as those that he claims to be fighting." Basescu's suspension in Kreuter's view is another threat to democracy and the rule of law in Romania. "I really don't feel sorry for the person – but the way that this is done is really worrying."

A former Romanian prime minister has made an attempt on his life after losing his appeal of a corruption conviction. Anti-corruption activists hailed the court ruling as a milestone for Romania's legal system. (21.06.2012)

An internal power struggle in Romania's divided government has escalated, with the parliament voting to impeach the country's president. The decision must be approved by a popular referendum in 30 days. (06.07.2012)

The opposition is talking of a coup as the power struggle in Romania intensifies. Now the government has started proceedings to get rid of the president. (05.07.2012)