Postcard from Europe: London′s frosty fashion | Europe | News and current affairs from around the continent | DW | 19.01.2010

British girls are known for braving the cold when it comes to dressing up for a night out. But as our London correspondent Carol Allen reports, the recent cold snap forced girls in the capital to ditch sexy for warm. 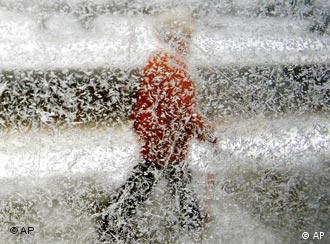 Just before Christmas London was awash with pretty young women on their way to parties wearing flimsy tops, tiny skirts just covering their bottoms and sporting bare legs. It was just when the really cold weather was starting and never a warm coat amongst the lot of them. I was afraid they'd catch their death of cold but the Christmas spirit, it appeared, was keeping them warm.

Sorry to disappoint the fellas but I'm afraid that's a sight, which has now disappeared from the capital's streets. Since the first fall of snow, we Londoners have taken to wrapping ourselves up big time. Gone are the strappy stilettos in favor of sturdy fur-lined boots and Doc Martens with thick laces and ice gripping soles, while heavy coats that haven't been worn for years have been dug out from the back of cupboards.

I was on the tube the other day, when I noticed a peculiar, wet dog smell that I haven't encountered for years. I tracked it down to the sheepskin being worn by the young man next to me, identical to the one my ex-husband was devoted to some thirty five years ago. Perhaps the young man had nicked it from his dad.

Then a normally elegant woman friend of mine turned up last week in an all embracing, almost floor length, black shaggy coat, which made her almost as wide as she was long and would have done very nicely as costume for yet another remake of King Kong.

Another hot or at least warm item is the long knitted woolen scarf, as worn by actor Tom Baker, when he played Dr Who on television in the seventies. Instructions for knitting them are now on the internet and I suspect a lot of people have printed them off and got their grannies busy knitting.

A genuine Doctor style fashion item is multi coloured and some fourteen/fifteen feet or four and a half meters long, which means you can wrap it a couple of times round your neck, then cover your lower face and ears, giving you a distinct resemblance to a Wild West bank robber, and still have plenty left over to tuck into your coat and keep your chest and tummy warm. 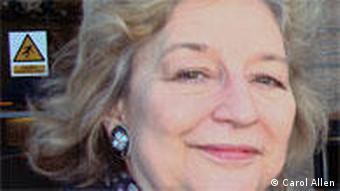 Carol Allen dug up a fashion gem from the 80s

Most fascinating of all though is the headwear. Highly popular is the little woolly hat resembling a tea cosy, worn pulled down over the ears. They come in plain and patterned. Going down the escalator in the tube last night I saw someone coming up the other side, whom I thought was wearing a panda mask. I then realised it was a young woman studying her feet intently and the panda effect was the black pattern on the top of her white woolly hat.

Another variation is the woolly hat with ear flaps, making the wearer look at bit like one of Santa's elves, while I spotted one in the King's Road today with not only ear flaps but also knitted pigtails attached.

This week a London newspaper carried a feature on what celebs are wearing in the cold. Gwen Stefani in a Puffa jacket that made her look like Michelin woman, Kate Moss in a hopefully long dead fox fur and rock star Florence Welch in, yes, a woolly tea cosy hat.

There's also the slanket, known as the snuggie, an American import, which is a blanket with sleeves, which makes the wearer look like a cross between a monk and a homeless person. Haven't actually seen them on the streets but it's reported a lot of people are buying them to wear indoors, when the central heating is struggling to keep up with the dropping temperature.

After slipping and sliding in my smart, heeled ankle boots at the start of the snow, I went over to lace ups with sturdy soles. I tried on the floor length coat left over from the maxi fashion days of the seventies but discovered I'd put on a bit of weight since then and couldn't do the buttons up. As every hat ever invented, even woolly ones, makes me look like a mushroom, I couldn't bear to go that far but I did dig out my furry ear muffs, which go back to about 1982.

I had a boyfriend then, who refused to be seen out with me wearing them, leaving me a choice between no love life or ear ache. The boyfriend didn't last long.

However, I have good reason to believe that the extreme cold weather may be coming to an end. Not because the temperature now is a bit above as opposed to below freezing point. But because the thermal vests that I ordered before Christmas have finally turned up, somewhat late in the day. A sure sign that spring must be on the way.

Online Special: Surviving the Winter – Coping with the Cold

They come from some of the world's hottest countries. Deutsche Welle's foreign-language interns have made Germany's wintry weather the focus of an online special. (30.12.2009)

Winter mayhem has continued to strike much of Europe, with more deaths reported and public transportation around the continent grinding to a halt. (20.12.2009)

More than 2,000 passengers were stuck under the English Channel after sub-zero temperatures caused Eurotunnel trains to break down. Icy weather has thrown travel plans across Europe into chaos and has even claimed lives. (19.12.2009)