Portuguese journalists unite in face of job cuts | Europe | News and current affairs from around the continent | DW | 01.11.2012

In crisis-hit Portugal, the media sector is taking as much of a battering as any other, with record job losses this year so far. What does this mean for the future and quality of journalism in Portugal? 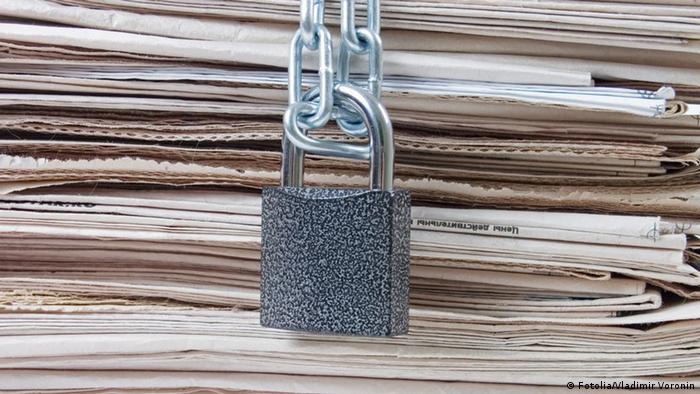 Outside the offices of Publico, Portugal's leading daily newspaper, striking journalists are trying to keep their spirits high as they strike against plans to slash over a quarter of journalism jobs at the paper.

Sofia Lorena has been at Publico for the past 11 years, where she works as a journalist for the foreign affairs desk. She's an award-winning journalist, having won one of Portugal's top journalism prizes last year for a series of reports from Iraq and Kuwait. Her reports form part of a long and illustrious tradition of award-winning public-interest journalism at the publication. For Lorena, getting a job at Publico was like a dream come true: "Publico was the place where I wanted to work since I was 15 or something. I had this idea that I had made in my mind! ... And when I came here, part of it was still lived up to it. It was still a place where I felt I could do the things that I consider important," she says. 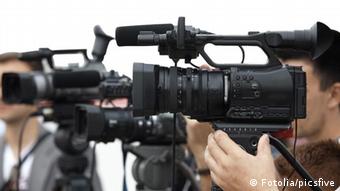 Portugal's state broadcaster, RTP is under threat of privatization

Publico, which is owned by the Sonae group controlled by one of Portugal's richest men, has never been profitable. But it does have prestige. However, now, with the country's worst recession in four decades, the publication has seen plummeting advertising revenue, prompting its management to announce drastic job cuts.

Lorena says she can't see how the publication can survive with all the job losses. "This has a legal procedure so now we are in phase of negotiations, but the intention to fire 48 people - it's official ... 48 workers among 240 - 36 journalists among 120. ... Publico with the quality that is made today, won't be possible to make without these workers, without these journalists," she says.

Lorena, who is a member of the staff committee being consulted on the cuts, is fighting to protect the jobs at risk. But she and her colleagues also worry about the broader implications for journalism in Portugal. Journalists from Publico joined other publications in a brain-storming session on the future of journalism in their country. Among those packing the second-floor room in down town Lisbon, were staff from the state-controlled news agency, Lusa, who took a break from their own picket line to attend the meeting. They were on a fourth day of strikes after the government announced plans to slash the agency's public service funding by a third.

Again, the economic crisis is to blame, as Portugal's euro-zone bailout obliges it to make deep spending cuts. Unlike at Publico, any redundancies at Lusa will be voluntary. Sofia Lorena is one of many who fear the cuts will mean loss of coverage from the places where Lusa correspondents are often the only journalists serving Portuguese readers. "Lusa has people everywhere in the world. We don't have - nobody in Portugal has any more - journalists not even in the countries that speak Portuguese. So if we don't have Lusa there, we won't be there," Lorena says.

Threats to the quality of journalism in both private and public sectors come at a time when mass protests against austerity take place and Portugal's political and economic model is being questioned. Lorena says it's in this climate when the journalists are needed most. "This time of profound crisis is when we need more that the media are enabled to do their work in the best conditions. And what we have is exactly the opposite. ... Every newspaper in Portugal this year has lost dozens of people, and we know that the ones that haven't, will. So it will be catastrophic if all these cuts go ahead."

This view is shared by many in Portugal. Even prior to the latest cuts, Carlos Magno, chairman of the media regulator, said Portuguese democracy was under threat. "No democracy survives without a strong press. The Portuguese press is vulnerable to the economic crisis, and incapable of discussing ways out of it in a reasonable, rational way, of mobilising citizens, and of being open to all opinions - namely alternative opinions on economic matters." 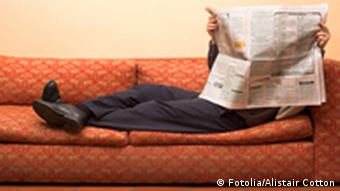 Cash-strapped media groups are, he says, being 'invaded' by capital from Angola - a former Portuguese colony with very different traditions regarding freedom of speech. More surprisingly, there are similar worries about Portugal's state broadcaster, RTP, after the government's advisor on privatisation suggested that its main TV channel could be handed to private investors.

Magno expects what happens to RTP is likely to have a huge bearing on the rest of the media. He says rich commercial opportunities await in a world with fast-growing Portuguese-language economies such as Brazil, Angola and Mozambique. "RTP will be a kind of cornerstone for the definition of Portuguese groups in future. These will either grow and consolidate or become ever smaller and die. I think the important thing is to scale up Portuguese groups and get them competing in the language space," Magno says.

Amid this uncertainty, Sofia Loreno has found comfort in the way in which the crisis is uniting journalists from different organisations, even if it's on each others# picket lines. "I think the circumstances are enhancing the solidarity, because people are realising that it's not just some jobs, it's the whole purpose of our profession that is at risk. There is this sense of urgency: in which ways will this process affect democracy, and if there are alternatives, what can they be," says Loreno.

That debate on the prospects of journalism in Portugal may be only in its infancy, but the next few months are set to be crucial in determining the future of Portugal's media and, most likely, the future of the country's democracy.

Fifty years ago, the offices of "Spiegel" magazine were searched and leading journalists arrested as a result of political pressure. Press freedom eventually prevailed. Today too the media's independence is under threat. (26.10.2012)

Interview with Asyl Osmonalieva on the current media situation in Kyrgyzstan. She is an editor at the Institute for War and Peace Reporting, and is participating in the DW Summer Academy in Bishkek from May until August. (22.10.2012)

As Georgia heads to the polls, observers warn of a crucial lack of independent media there. Media supporting the opposition say the government is curbing press freedoms, while Tbilisi dismisses the accusations. (01.10.2012)

Listen to the report from WorldLink