Hundreds of thousands of protesters have taken to the streets in more than 20 cities across Portugal to demand an end to government austerity measures. They are a condition of Portugal's financial bailout. 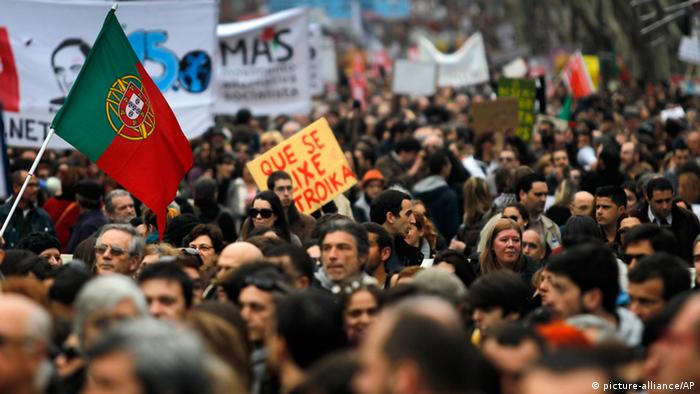 More than 200,000 people gathered outside Lisbon's Finance Ministry on Saturday to protest against austerity measures demanded by the nation's international creditors. It was the biggest show of disconnect since demonstrations in September forced Portugal to adjust its fiscal policy.

Protesters carried placards reading "Austerity kills" and "Power to the people!" in reference to the so-called troika of international lenders behind Portugal's financial bailout.

Portugal has sent a positive signal to the financial community with its return to capital markets and hopes to lure foreign investors to settle down. But many young Portuguese are leaving the country in pursuit of work. (31.01.2013)

Others chanted the lyrics of a 40-year-old song linked to the 1974 "Carnation Revolution" that overthrew the fascist dictatorship of Antonio Salazar.

Protesters also marched in the northern city of Porto and more than a dozen other towns and cities. The latest movement, organized by a group of activists known as Que Se Lixe a Troika, or Screw the Troika, followed the introduction of the biggest tax hikes in living memory.

They were the latest in a series of tax increases and welfare cuts demanded by the European Central Bank, the International Monetary Fund and the European Commission in exchange for the 78 billion euro ($102 billion) rescue package agreed in 2011.

The government must make another 4 billion euros worth of cuts over the next two years, in a move likely to further deepen the nation's worst recession since the 1970s. The health service, education, pensioners and government workers are expected to be the hardest hit.