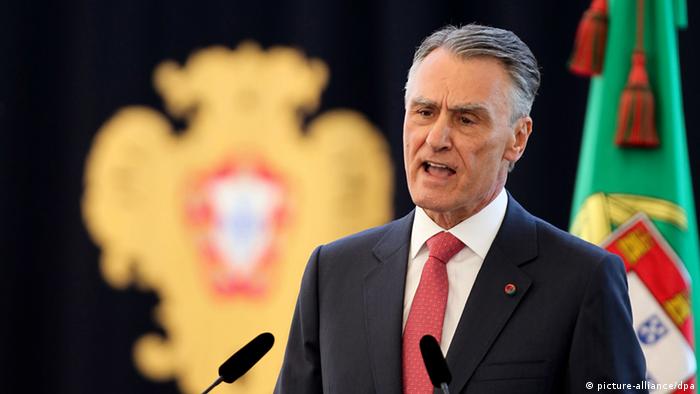 Speaking in a televised address to the nation Wednesday evening, Cavaco Silva said that "the current government has all the authority to exercise its functions."

He said that early elections would take place on June 14 and rejected a proposal by the ruling Social Democrats for a cabinet reshuffle.

He appealed to the leading parties to come to a compromise that will prevent the country from needing a second financial bailout.

Uproar over strong spending cuts and tax increases enacted as a condition for a bailout had threatened to topple the government. The turmoil came to a head last week when the foreign and finance ministers resigned, sparking what Cavaco Silva called a "grave political crisis."

Portugal: A bitter pill too far?

Portugal was seen as a model for Europe. It accepted its bitter austerity medicine with good grace, but as political and financial crises return, commentators are now asking whether perhaps it went too far, too fast? (04.07.2013)

The financial rescue was negotiated by the Socialist Party when it was in power but enacted by the center-right ruling coalition that won snap elections in 2011. The recent political unrest had raised the possibility of Portugal not complying with bailout demands and risking further economic instability.

In his 30-minute prime-time broadcast, the president proposed that the ruling coalition and opposition Socialists reach an agreement to ensure Portugal comply with bailout conditions. Part of that deal, Cavaco Silva said, would have to include plans for early elections to coincide with the country's planned exit from the bailout in 2014.

"I will give my firm support to this deal, which in the current emergency truly represents a commitment of national salvation," he said.

The opposition had called for the president to call a snap election, but he rejected the idea, saying they would be "extremely negative" for the country's credibility as it tries to work its way through the reform process. They would also paralyze the country politically for 81 days, create "huge" political and financial instability and likely necessitate more outside economic assistance, Cavaco Silva said.

The austerity terms of Portugal's bailout have sent the country into its deepest economic recession since the 1970's and driven unemployment to near record levels of 18 percent. In response to the latest political turmoil, Portugal's 10-year bond yield rose to over 8 percent last week from around 6.4 percent, but has gone down since the coalition starting working to resolve the crisis.