Privately owned radio station Taranga FM was forced to shut down by Gambian authorities. This may be a sign of things to come if Gambian President Yahya Jammeh stays in power after losing the December election. 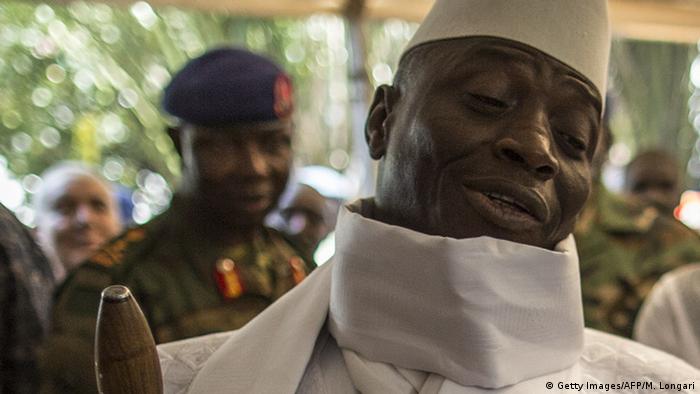 One radio station staff member told French news agency AFP on condition of anonymity "four National Intelligence Agency operatives and one police officer in uniform came to the radio station this (Sunday) afternoon around 2:30 pm and told us to stop broadcasting."

West African countries have nominated Senegal to lead a military intervention in Gambia if President Jammeh does not step down. Jammeh refused to accept defeat in elections on December 1. (23.12.2016)

"They said they have been ordered by the director general of NIA, Yankuba Badjie, to tell us to stop broadcasting with immediate effect," the staff member added. He was not given a reason other than that security was only "acting on executive orders."

No radio staff members were arrested, according to one security source. "We only asked them to stop broadcasting and they cooperated with us. They have stopped broadcasting since in the afternoon," the source told AFP.

An AFP correspondent said the radio station was not broadcasting on Sunday evening.

Taranga FM had been shut down by the Gambian government before. The Gambia Press Union warned that Taranga FM closing may be the beginning of a crackdown against independent media outlets. Press freedom group Reporters Without Borders ranked Gambia 145 out of 180 countries for press freedom in 2016, saying there was a "climate of terror around anything remotely to do with journalism." Taranga FM translates news from Gambian newspapers into local languages.

The radio station is considered critical of Gambian President Yahya Jammeh, who lost a December election to former real estate agent Adama Barrow. After initially accepting the results, Jammeh alleged irregularities and filed a petition to the Supreme Court. It is due to be reviewed on January 10.

Barrow is determined to take office on January 10. The Economic Community of West African States (ECOWAS) said it will stage a military intervention if Jammeh does not step down by January 19. The intervention would be led by neighboring Senegal.