As Reformation Year begins, Pope Francis welcomed a high-ranking Protestant delegation from Germany to the Vatican on Monday. The pontiff urged both denominations to put all remaining differences aside. 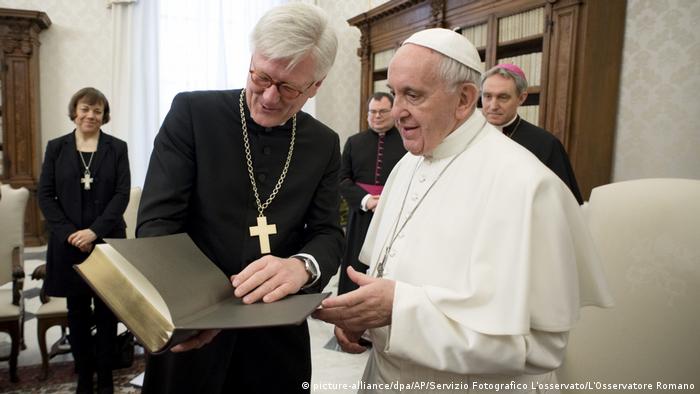 In a meeting in Rome with Heinrich Bedford-Strohm, the chair of the Council of the Protestant Church in Germany (EKD), Pope Francis called for the Reformation's 500th anniversary to be an opportunity for increased efforts to achieve ecumenism.

"We must, with imploring prayer and all of our strength, strive to overcome the obstacles that still exist," Pope Francis said.

The pontiff encouraged Protestants and Catholics to use theological dialogue to overcome remaining differences in doctrine of faith and ethics together. These enduring divisions, he added, were particularly painful for mixed-confessional marriages and families.

The pope praised existing discourse between Protestants and Catholics in Germany as the "blessed path of fraternal cooperation." He urged both sides to continue on the path of unity in order to better assist the needy.

Christians everywhere had a particularly great responsibility during "a time when humanity is wounded by deep cracks, and is experiencing new forms of exclusion and ostracism," added the pope.

Monday's meeting was Bedford-Strohm's second  with the pope in 12 months. Last April, he spoke privately with Francis for an hour at his Vatican guesthouse, Casa Santa Marta.

Accompanied this time by Cardinal Reinhard Marx, Chairman of the German Bishop's Conference, Bedford-Strohm also expressed the importance of agreeing upon a common communion for cross-denominational couples. 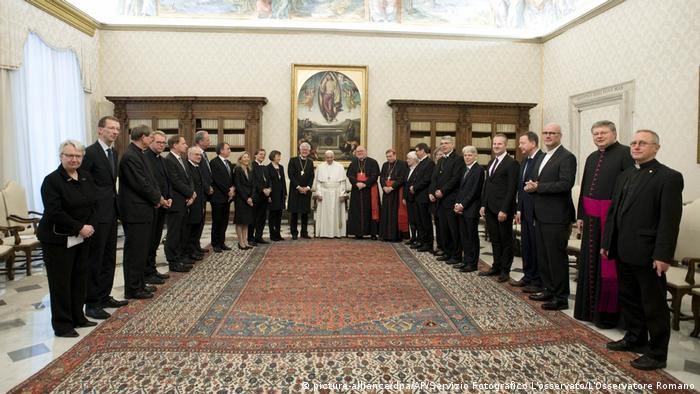 The meeting with the pope is a highlight of Reformation Year

"Participation in the Baptism of the Sacrament forms an insoluble band for all Christians," he said.

Prior to the meeting, Bedford-Strohm described it as another milestone on the journey to 2017's ecumenically-shaped Reformation Jubilee, and said he hoped to consider, together, what concrete steps Catholics and Protestants can take towards visible unity.

After Monday's meeting, Marx said the pope's speech was encouraging and invigorating.

"We all know it can not simply happen overnight. And the year 2017 will not solve all problems," he said. "But I often say there is a certain momentum, and a moment here that we must use."

As the home of the Reformation, Germany has a special responsibility to now unite Christian denominations, Marx added and confirmed that both he and Bedford-Strohm had invited the pope to visit Germany this year.

Bible on a beer mat: German Protestants hope to increase church talk down at the pub

As the 500th anniversary of the Reformation approaches, the Protestant Church in Hesse and Nassau (EKHN) has launched a quintessentially German religious initiative: "Bible on a beer mat." But who's footing the bill? (07.10.2016)

In 1517 Martin Luther penned a document attacking the selling of indulgences. His 95 Theses were to spark the Reformation and the split with the Catholic Church. Germany is celebrating the 500th anniversary of this act. (02.01.2017)