Following on from a London retrospective of legendary British sculptor and pop artist Eduardo Paolozzi, a Berlin exhibition celebrates the experimental side of the artist's influential oeuvre.

"One of the most innovative and irreverent artists of British postwar modernism."

That's how Stefanie Heckmann, curator of the Berlinische Galerie's exhibition "Eduardo Paolozzi: Lots of Pictures — Lots of Fun," describes the sculptor and artist. Born in Edinburgh in 1924 of Italian descent, the young Paolozzi co-founded the avant-garde and highly influential London Independent Group, an association of radical young British artists.

He also unwittingly pioneered pop in the late 1940s art and early 1950s when he created a series of collages created from magazine cutouts that echoed the Dada photomontage of Hannah Höch, but focused on popular culture and advertising.

"After the Second World War, Paolozzi was one of the first artists in the UK to be fascinated by the imagery surrounding consumer culture and mass media," Heckmann notes.

"From colorful American magazines, comics, newspapers and advertisements, Paolozzi cut and pasted his early 'Bunk!' collages that paved the way for British pop art," Heckmann told DW. Indeed, several "Bunk!" screenprints that were created by the artist in the 1970s from his original collages will be the key focus of the exhibition. 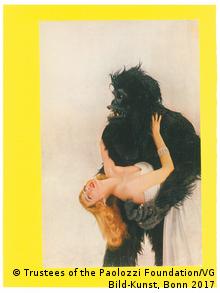 Paolozzi's 'Bunk: Vogue Gorilla with Miss Harper' from 1950 is an example of a collage taken wholly from a magazine that plays on existing cultural collages

The Berlinische Galerie's show, which opens on Februray 9, is held in collaboration with London's Whitechapel Gallery, which in 2017 hosted a Paolozzi retrospective that showed the artist's complete oeuvre. The exhibition in the German modern art museum is the first monographic show in Germany in over thirty years to be devoted to this artist. 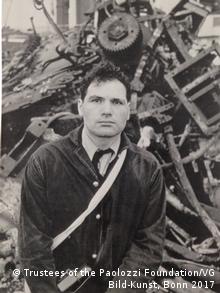 Eduardo Paolozzi challenged the aesthetic conventions of his day with a revolutionary new collage technique.

"In contrast to the London show, the Berlinische Galerie concentrates on its idiosyncratic, experimental work from the 1940s to the 1970s, with which the artist drew great international attention," says Heckmann.

On display are the most important works from international private and public collections, supplemented by a number of pieces from the Berlin years. Having lived and worked in Paris in the late 1940s, Paolozzi spent a productive year in West Berlin from 1974-75. The exhibition also draws on works already held in the Berlinische Galerie's permanent collection.

Paolozzi had a strong affinity with Germany and after leaving Berlin based himself in Munich until the 1990s.

Knighted in 1989, Sir Eduardo Paolozzi died in 2005 in London at the age of 81. An obituary in the British newspaper The Guardian noted that the artist created some of "the finest examples of pop art  the style he was instrumental in shaping." Visitors to Berlin's Berlinishe Galerie will be able to judge for themselves.

Eduardo Paolozzi. Lots of Pictures — Lots of Fun runs from February 9 through May 28, 2018, at the Berlinische Galerie.

Real or fake, America has become lodged in the popular imagination. A new exhibition of work by US artists explores this mythology and reconsiders what people can understand as "American." (08.12.2017)

A new exhibition exploring representations of gender identity, diverse sexuality and homosexuality opens at the Tate Britain, exploring the question: what exactly is queer British art? (05.04.2017)

The state authorities may have brushed over centenary celebrations of the 1917 Russian Revolution, but the era's artistic innovations are visible across Russian design today, in everything from fashion to architecture. (07.11.2017)