Once part of the inner circle of Andy Warhol's Pop Art scene, the artist best known for creating the "LOVE" sculpture has passed away at the age of 89. He left a world of love, and hope, in his wake.

Born Robert Clark in 1928 in the Midwestern state of Indiana, artist Robert Indiana died on May 19, leaving behind a storied career and a legacy of love-inspired artwork.

In 1954, Indiana moved to New York, where he became deeply entrenched in the Pop Art Scene that was being pioneered by Andy Warhol. In the 1960s, Indiana gained international fame with his oversized statues of stacked up letters that form the word "LOVE." Today, the sculptures can be seen all over the world, from Jerusalem to Saint Petersburg and Berlin.

But this masterpiece wasn't the only one Indiana did in his lifetime. He also painted a portrait of Jimmy Carter and created a "HOPE" sculpture that helped raise money for Barack Obama's 2008 presidential campaign. But for better or worse, the fame of "LOVE" overshadowed his other accomplishments.

Although "LOVE" debuted in the 1960s, it wasn't until 2013 that Indiana was honored with a major exhibition at the Whitney Museum of American Art in New York City. The artist's brief comment on the honor was: "That took a while." 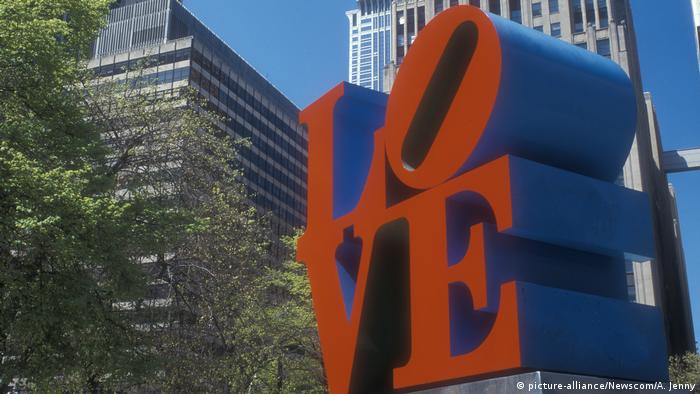 The "LOVE" statue in Philadelphia

Indiana had a reputation for being a hermit. Once, he stood up Barack Obama in the White House. Another time, he had a TV team from US broadcaster NBC wait for days near his home before finally allowing reporters to interview him.

In 1978, Indiana moved from New York to his estate on Vinalhaven, an island off the coast of Maine. The artist often visited Vinalhaven's artist colony before moving there.

A year-long search for the next director of New York's Metropolitan Museum of Art has come to an end; Vienna-born art historian and former head of prestigious museums in Frankfurt, Max Hollein, has been been chosen. (11.04.2018)

Eight months after James Rosenquist's death in March, the Museum Ludwig in Cologne is showing the American pop art icon's key works. Some of the paintings have never been displayed in Germany. (17.11.2017)

A New York art auction has fetched $110 million for a giant canvas by the late artist Jean-Michel Basquiat. The sale of the 1982 "Untitled" painting sets a new record price for American artists at auction. (19.05.2017)

In the 1960s, artist Robert Indiana created his iconic 'LOVE' sculpture. From Berlin to Saint Petersburg, here's what 'LOVE' looks like around the world. (22.05.2018)

Da Vinci's "Salvator Mundi" holds the record for the most expensive work of art to go under the hammer, rather than to be sold privately. But Munch and Van Gogh also make the list. (15.05.2018)

Considered a superstar of pop art, the British painter is one of the most influential artists living today. He turns 85 on July 9.