The 2010 wine yield has suffered across Europe after a rainy and cold summer. But German winemakers hope a unique blend of sugar and acid will make this year's vintage an exceptional flavor - even if there is less of it. 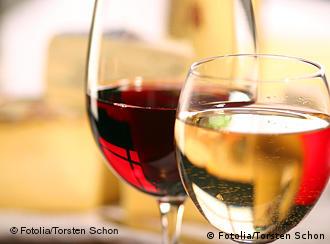 Wine prices may increase when 2010's grapes hit the market

German winemakers harvested about half of the amount of grapes they took out of vineyards last year making it one of the worst yields in decades, according to Michael Bluemling, a wine grower on the Moselle River.

"It's always disappointing when you're harvesting less fruit than expected," he told Deutsche Welle.

This October Bluemling harvested just 5,000 liters per hectare, less than half of the maximum yield of 12,500 liters. A cold snap in June stifled what winegrowers call the fruit set - the critical phase when the grapevine's flowers are fertilized and start growing into grapes.

A rainy August also dampened hopes for the 2010 vintage. Grapes - and Germans - suffered through twice as much rain and a third less sunshine compared to an average August.

The lack of sun kept the grapes from fully developing and all the moisture led the botrytis fungus, which gives the Riesling grapes their sweet taste, to develop too quickly. This destroyed some of the crop, further reducing the harvest. 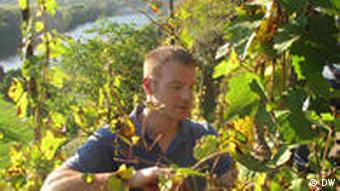 Michael Bluemling was disappointed by the low harvest

The low yield could hit the local economy hard.

"Wine is everything for this area," Bluemling said. "The Romans cultivated wine 2,000 years ago and since then the wine growing is very important for this region."

The state Rhineland-Palatinate, where Bluemling works, produces 90 percent of Germany's export wines and 70 percent of the nation's total wine production. Some 12,000 businesses in the state are relying on the harvest to produce wine.

Despite this year's catastrophic harvest, Bluemling said he remains optimistic about how the Riesling growers will fare over the next year because of 2009's bumper harvest.

"The wineries still have some wine from the last years and so all the wineries in our region are going to survive the smaller vintage and we hope that the next vintage will be totally different," Bluemling said.

But Hans Rainer Schultz from the Wine Research Center in Giesenheim isn't so optimistic.

"The lower yield is going to be very painful for many wine growers, because some of them only harvested about 50 percent of what they normally harvest," Schultz said. 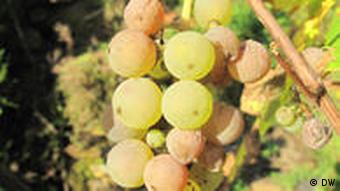 Overall predictions for the German wine harvest show a 23 percent drop on the average yield. Schultz said German winegrowers weren't alone. Vineyards in Austria and Italy have seen their yields fall as well. Schultz said he think this lower yield will be reflected in wine prices.

"Within Europe, the yield is going to be smaller, and I think on average the prices are going to increase," he said.

Regarding the taste of this year's Riesling wine, Schutz isn't quite as glum. He said despite a lot of fear about this year's vintage, winemakers will be able to make a decent wine.

While the 2010 vintage may turn out to be unusually good, he added that winemakers will have to wait and see if an increase in prices will be able to compensate winegrowers for their low yields.

Germany's Mosel Valley produces some of the world's best Rieslings. But now this pristine winemaking region is threatened by a bridge that is to span the valley, against the wishes of many locals and winemakers. (17.04.2010)

Europe's small-scale wine producers, usually in competition with one another, have come together to fight what they see as the two biggest threats to their industry: the EU and multinational corporations. (13.12.2009)

German wine growers are defying a slump in the European wine market which has dented sales in the continent's three big producers, Italy, France and Spain. (07.08.2008)