Poll: Majority of Germans Wants Troops Out of Afghanistan | Germany | News and in-depth reporting from Berlin and beyond | DW | 17.03.2007

Poll: Majority of Germans Wants Troops Out of Afghanistan

A clear majority of Germans would like the German troops engaged in reconstruction operations in the north of Afghanistan to pull out, according to an opinion poll published Saturday. 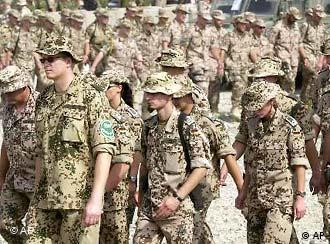 A majority wants them to come home, a new survey reveals

The poll was taken just a month before a squadron of six Tornados with high-resolution cameras takes on a controversial reconnaissance role supporting NATO troops engaged in combat operations in the south of the country.

The poll by the TNS institute commissioned by the newsmagazine Der Spiegel found that 57 percent of those surveyed wanted a complete withdrawal, while 36 percent were in favor of continued engagement.

Under their current mandate, the German troops are prevented from supporting the combat operations of the NATO-led International Security Assistance Force (ISAF) that is fighting the Taliban and al Qaeda in the southern provinces. 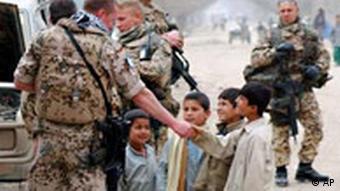 Germany's NATO partners have repeatedly called for an extension of the German mandate.

On March 9, the German parliament approved the deployment of Tornado jets by a large majority, although there was opposition from some on the left of the grand coalition currently in power.

Two conservative members failed in their attempt to get the Constitutional Court to block the deployment as contrary to the restrictions imposed on the German military under the constitution.

Germany has nearly 3,000 troops serving with the 35,000-member NATO force, mainly in mixed civil and military provisional reconstruction teams in the relatively peaceful northern part of the country.

In addition, there are 14,000 US-led coalition troops in Afghanistan engaged in Operation Enduring Freedom.

A group of German soldiers are contesting the military's decision to send Tornado jets to Afghanistan to carry out surveillance missions for NATO, the defense ministry confirmed on Friday. (16.03.2007)

Germany's parliament approved on Friday a plan to deploy six Tornado jets to provide reconnaissance assistance to NATO troops in southern Afghanistan ahead of an expected spring offensive by insurgents. (09.03.2007)

Germany is expected to decide soon on a NATO request to send reconnaissance aircraft to southern Afghanistan. According to a news report, German pilots may be preparing for more than that, however. (29.01.2007)