Politician Wants to Bring Milwaukee to Berlin | Germany | News and in-depth reporting from Berlin and beyond | DW | 24.01.2002

The Premier of Hessen and Christian Democratic Union political star, Roland Koch rolled into Berlin on Thursday and proposed an American-style welfare program that would provide 800,000 jobless with employment. 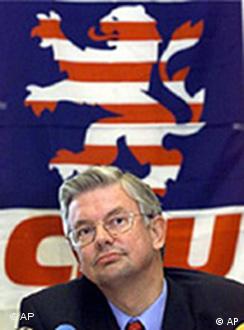 Berlin-dreaming. Hessen Premier Roland Koch has been mentioned as a future chancellor candidate

A few months after he made headlines across Germany with a radical proposal to reform his state’s welfare system, Hessen Premier Roland Koch was in Berlin, pitching his plan on a national level.

Koch’s proposal is based on the initially successful Wisconsin Works program in the United States. It looks to motivate the unemployed by creating jobs and slashing benefits for those unwilling to work. The plan was blasted by both social workers and politicians when Koch first introduced it after a visit to Washington D.C. last August.

Critics said it was impossible to bring an American-style program, which places heavy emphasis on punishing those unwilling to work, to a country that prides itself on a social democratic tradition. They called Koch a political opportunist, eager to present himself as a reformer in the glow of the national spotlight.

After the initial buzz, Koch’s plan, like so much other news, was swept aside by the Sept. 11 attacks in the United States.

But his Christian Democratic Union siezed the opportunity knocking on their doors during an election year. With the German economy in the dumps and no solid proposals to stave off rising unemployment, CDU leaders threw their support behind Koch’s proposal.

Koch at a news conference on Thursday said his plan could put 800,000 people back in the workforce if expanded on a national level.

"We are now very confident this will happen, if you would just let us do it," Koch said.

The German government paid out $19 billion in welfare benefits last year to about 2.68 million recipients. Of that number, 1.52 million are between the age groups of 15 and 65.

Welfare system critics say this age group is not motivated enough to get off welfare. They blame the German system’s generosity. Most recipients get more in welfare benefits than they would if they were to take a job. Chancellor Gerhard Schröder’s Social Democratic Party proposed a wage-subsidy plan last week that hopes to reverse this trend and fill more jobs.

But Koch promises more. He wants to eliminate bulky state bureaucracy by combining welfare and employment offices. He also wants to set up job centers, credited with finding work for thousands of welfare recipients in Wisconsin, that would provide job skills and placements for the unemployed in Hessen. For those still uninterested in finding work, Koch threatens gradual cuts in welfare benefits until the well runs completely dry.

Germany’s Labor Minister Walter Riester said Koch’s concept was right, but that it was already in place in programs throughout the country. Riester, of the Social Democratic Party, said cooperation between welfare and employment offices is already taking place in 100 cities around Germany.

Riester was joined in criticism by the head of one of Germany’s most powerful unions. Ver.di Chairman Frank Bsirske said the model was unsuitable to solving the unemployment situation in both the near and far future.

He also pointed to evidence that Wisconsin’s program has begun failing as the roaring United States economy has faltered. The program, he said, created jobs in the booming 1990s that can’t be financially compensated today.