The World Health Organization says it has confirmed 10 cases of polio in the northeast of Syria. Officials have warned that the disease could easily spread amid the humanitarian crisis in the country. 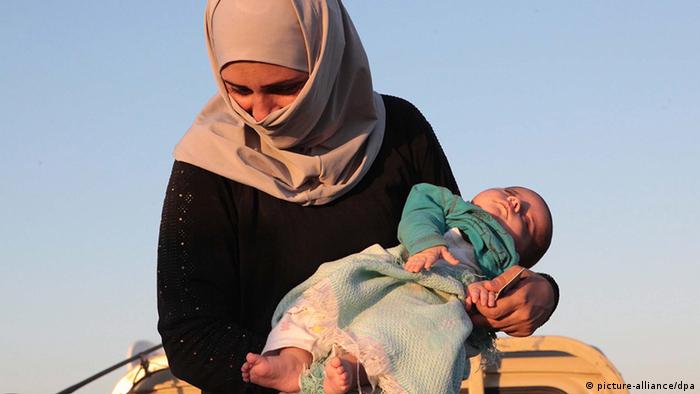 On Tuesday, the World Health Organization (WHO) announced that samples from 10 of 22 children who were being investigated had contained the wild polio virus.

This month, the 22 children from Deir al-Zor province became paralyzed with acute flaccid paralysis (AFP), which can denote the presence of polio.

WHO spokesman Oliver Rosenbauer said the confirmed cases were among babies and toddlers who were "underimmunized" and that the risk of a rapid spread of the disease was high.

Most of the victims are younger than 2. It is believed none of them have been vaccinated at all against the disease, which can lead to acute crippling or death, sometimes in a matter of hours.

First cases in over a decade

Syria launched an immunization campaign around the country days after the WHO announced that it had received the reports of AFP cases in Deir al-Zor.

Nearly all Syrian children were vaccinated against the disease before the country's civil war began over two-and-a-half years ago. The illness was last reported in Syria in 1999.

The conflict has meant that access to basic hygiene and vaccinations has been made difficult or even impossible for many people. Nearly 7 million people have been driven from their homes as rebels fight troops loyal to Syrian President Bashar al-Assad.

On Saturday, the European Union announced that it was prepared to step up its assistance to the WHO if the polio outbreak were confirmed. The EU has already committed 13.5 million euros ($18.6 million) to the WHO since the Syrian crisis erupted.