A Syrian man has stabbed and killed a Red Cross mental health counselor in the southwest German city of Saarbrücken, police said. The attacker and the psychologist allegedly got into an argument during a therapy session. 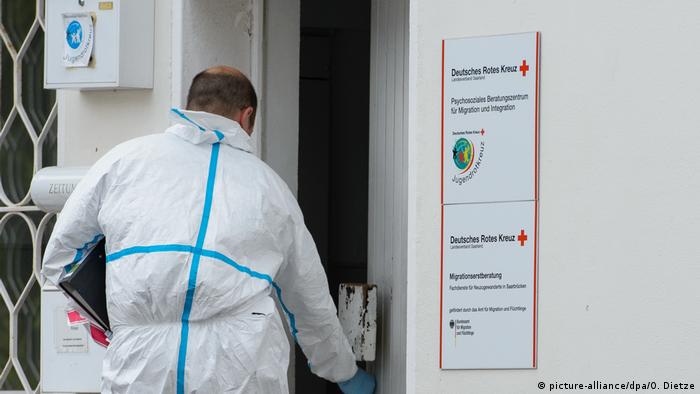 Woman stabbed to death at Swedish center for young migrants

A young asylum seeker in Sweden has allegedly stabbed to death an employee at a refugee center near Gothenburg. The victim, a 22-year-old woman, died of her injuries in hospital. (26.01.2016)

A Berlin court has convicted a teenage Syrian refugee of setting fire to a homeless man. The attack stirred anti-migrant sentiment across Germany. Cases involving six other suspects are ongoing. (17.05.2017)

German authorities tracked down the suspect soon after the Wednesday attack, finding him only few hundred meters away from the scene of the crime in Saarbrücken. The man was immediately hospitalized for serious injuries, which appeared to be self-inflicted.

The police believe that the 27-year-old Syrian killed a 30-year-old man working as a therapist in a counseling center for traumatized refugees. The migrant allegedly got into an altercation with the Red Cross psychologist during a therapy session, and stabbed him. The victim died at the scene. While the reason for the attack was not immediately clear, officials do not believe that the incident was linked with terrorism. Saarbrücken is the capital of Germany's smallest state, Saarland

Police also found a knife at the scene, but did not immediately confirm that it was the murder weapon.

The victim has worked for the Red Cross since 2014. The counseling center in Saarbrücken, near the French border, specializes in treating refugees suffering from post-traumatic stress or newcomers having trouble adaptating to a new culture.

The attack appears reminiscent of a fatal stabbing in Sweden last year, when a 22-year-old female social worker was killed by a young migrant.