Police have found explosives in an apartment in the German city of Chemnitz and arrested three people over an alleged terror plot. The main suspect, 22-year-old Syrian Jaber A., is still on the run. 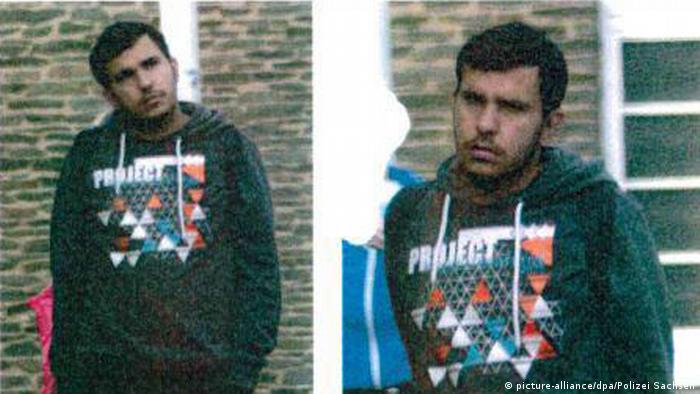 A bomb threat in the eastern German city of Chemnitz has led police to place a high-rise apartment on lockdown and launch a large-scale manhunt for the suspect.

The police found several hundred grams of a highly explosive material in the apartment after hours of searching. Officials later said the substance was "far more dangerous than TNT."

"It was not just lying out on the kitchen table, it was relatively well hidden,"  Saxony's police spokesman Tom Bernhardt told reporters.

He added that the explosives were not considered stable enough to move and they would likely be destroyed at the scene after evacuating the area.

There were "suspicions of plans for a bomb attack," according to the investigators.

"This is no longer a joke," a spokesman told the German DPA agency.

Police released a photograph of the suspect, who is believed to be linked to an Islamist group. He has been identified as Jaber Albakr, a 22-year-old from Damascus, Syria. Police said he was last seen wearing similar clothes to those in the photo.

Three people were arrested over alleged ties with the main suspect who was still on the run, according to the police. The security forces blocked off the area around the central train station in Chemnitz.

Hundreds of police, including specialist commandos, are combing the area for the suspect. Local residents have been urged to remain indoors and told not to publish any photos or videos of authorities investigating the area.

"The cordoned-off area is so wide that we can almost rule out a threat to the local population," police spokesman Tom Bernhardt said.

Saxony's police raided the flat after receiving information about the alleged attack plans from Germany's domestic intelligence agency on Friday night, Bernhardt told reporters. They failed to find the suspect in the raid.

It remains unknown how many suspects there are or what the motive of the planned bomb attack was.

The suspect reportedly arrived in Germany as a refugee from Syria last year.