A campaign aide has confirmed the raid took place, saying police "finished" the operation linked to a corruption probe. The ex-premier has vowed to continue his campaign for the French presidency amid calls to step down. 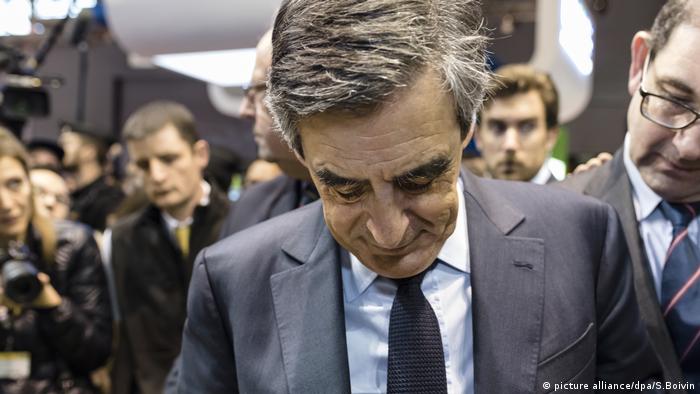 Francois Fillon can't get rid of "Penelopegate." Condemning his "political assassination," he'll be summoned by investigating magistrates. However, Fillon is not a victim of the judiciary, writes Barbara Wesel.

French police on Thursday raided the home of French presidential candidate and former premier Francois Fillon in connection to a "fake jobs" probe involving his wife.

The center-right politician vowed on Wednesday to continue his presidential campaign amid a criminal investigation into allegations his British wife Penelope Fillon received nearly one million euros ($1.05 million) for a parliamentary job she did not hold.

Fillon has accused authorities of politicizing the investigation, saying he has "not been treated like anyone else facing the justice system."

Since his announcement, a campaign treasurer and three legislators of Fillon's Republicans party have quit his campaign. The center-right lawmakers said in a statement that the campaign had taken a turn "incompatible" with their political aspirations.

The presidential candidate has seen his support drop since the allegations emerged in an investigative report by French satirical newspaper "Le Canard Enchaine."

An opinion poll by the "JDD" newspaper suggested that 65 percent of respondents wanted Fillon to withdraw from the presidential election, slated for April with a runoff in May.

The latest polls place former Economy Minister Emmanuel Macron and right-wing National Front candidate Marine Le Pen against each other in the second round.