Turkish police have arrested the editor of a top daily newspaper and more than 20 others in raids across the country. Those detained are said to have links to a rival of President Erdogan. 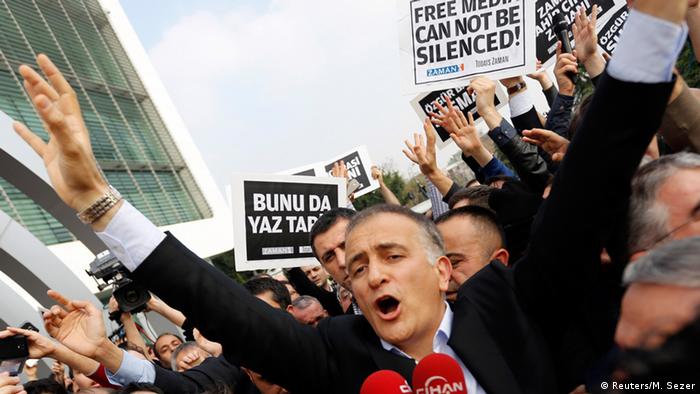 At least 24 people were arrested in 13 cities across Turkey on Sunday, as authorities crack down on those with links to a US-based moderate Muslim cleric, Fethullah Gulen, who is a bitter rival of Turkish President Recep Tayyip Erdogan.

The raids also targeted media outlets. One of those arrested was Ekrem Dumanli (seen above), the editor in chief of the top Zaman daily. His arrest in Istanbul was broadcast live on television.

Hundreds of people had gathered outside Zaman's headquarters in protest at Dumanli's arrest, shouting "Free press cannot be silenced."

Others arrested include police, TV producers and other journalists. The government has accused Gulen's movement of plotting to bring it down, and say it is behind corruption allegations last year that forced the resignation of four Cabinet ministers.

Gulen, a former ally of Erdogan, denies the allegations. He lives in self-imposed exile in the US state of Pennsylvania. The government has said it wants Gulen extradited.

State-run news outlet Anadolu Agency said warrants had been issued for the arrests of 32 people connected to the movement, and that 24 had been detained in raids across Turkey.

Anadolu said those arrested were suspected of "using intimidation and threats" to try and seize control of state power. It said the police officers detained are suspected of fabricating crimes and evidence while investigating an organization close to al Qaeda in 2010.

Erdogan has faced criticism at home and abroad of tightening both press freedom and internet control during his time as prime minister, and current president.