Police have stopped many protestors from reaching the ECB, saying some participants were disturbing the peace. Thousands are occupying Germany's financial capital, Frankfurt am Main, to protest EU austerity policies. 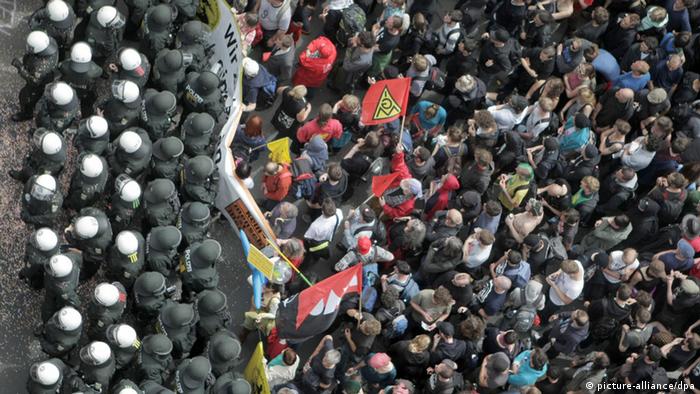 About 7,000 people marched toward the headquarters of the European Central Bank (ECB) on Saturday in protest of EU austerity policies imposed on crisis-stricken member states.

Some carried signs reading "Make Love Not Money" and "Troika, IMF, get out of Greece."

Police brought part of the "Blockupy" demonstration to a crawl around midday when several hundred protesters refused to remove masks, while others began setting off fireworks.

According to a police spokesperson, authorities used pepper spray and batons to disperse the crowd and to restore order. There were reports of participants leaving the demonstration to seek medical treatment after sustaining injuries.

The anti-capitalist "Blockupy" movement began on Friday morning when thousands of people attempted to prevent access to the ECB building. However, a large contingent of police forces, wearing helmets and riot gear, thwarted the effort.

Police said the protest action had been peaceful with the exception of minor clashes at security barricades.

Europe's Blockupy movement took shape after the Occupy Wall Street initiative in 2011. It has directed its protests against the perceived role of banks and governments in impoverishing many people in Europe, citing in particular cutbacks that have denied many the ability to earn a living.

Similar demonstrations were scheduled to take place across Europe later on Saturday.