Indian police have launched a probe into the deaths of 11 members of a family, 10 of which were found hanging from the ceiling of their home near New Delhi. There were no bullet marks on the bodies, officials said. 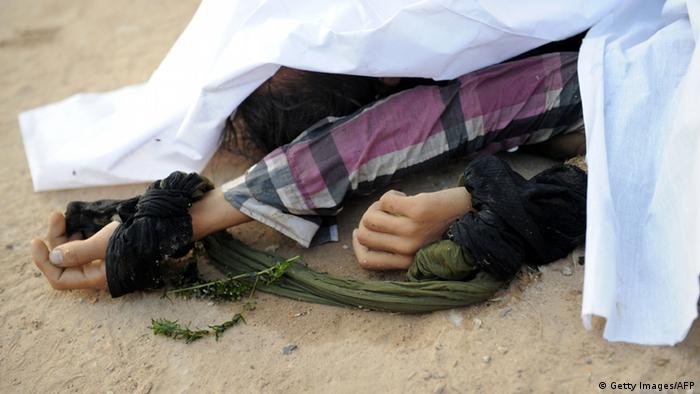 Eleven members of a family — four men and seven women — were found dead in a New Delhi village home in "mysterious" circumstances, the police said Sunday.

Their bodies, blindfolded and with hands tied behind the back, were hanging from an iron grill in the courtyard.

"Ten of the 11 family members were found hanging when we reached the house. The last, a 75-year-old female, was dead on the floor," a police official told AFP news agency.

"It is still too early [to know what happened]. It is an ongoing investigation and we haven't ruled out anything," he added.

Police have registered a murder case. They said there were no bullet marks on the bodies and no suicide note was found.

The family had been living in the house in Burari village in the northern part of the Indian capital for two decades, Hindustan Times newspaper reported. The house belonged to a local plywood and dairy shop owner.

Police are also investigating if the deaths were linked to the "observance of some definite spiritual or mystical practices by the whole family."

During a search of the house, the police found some handwritten notes that raised suspicions of the deaths being linked to occult practices.

A police statement said the house had not been ransacked, and no valuables were found to be missing.

Broadcaster NDTV reported that only the family dog was alive.

"That the dog did not bark reinforced the police suspicion of murder," the broadcaster said, citing sources. NDTV reported that it was suspected that one of the family members killed the rest and then committed suicide.

Burari was the scene of a deadly gang war just two weeks ago.

On June 18, three people were killed and five were injured when two rival gangs opened fired at each other in the main Burari market.

Police are yet to establish any connection between the 11 deaths and the recent gang war, but said they were investigating all possibilities.

Read more: The thuggery of 'anti-Romeo' squads causes a stir in India

In a village near New Delhi, three women went "mysteriously" unconscious at the same time and woke up to discover their hair was chopped. DW examines the interplay between superstitions and psychological issues in India. (17.08.2017)

Police in northern India arrested a "quack" accused of infecting dozens of people with HIV by reusing a syringe. The case is the latest to expose India's crippled public health care system. (07.02.2018)

'Selfie deaths' on the rise in India

The obsession with taking a perfect selfie can be dangerous. In India, the number of "selfie deaths" has increased manifold in the past few years, Murali Krishnan reports from New Delhi. (27.09.2016)