Police Continue to Look for Motive in German School Shooting | Germany| News and in-depth reporting from Berlin and beyond | DW | 12.03.2009

Police Continue to Look for Motive in German School Shooting

Investigators are still looking for a motive in the school shooting that left 16 people dead, including the killer, and several others injured in the southern German town of Winnenden. 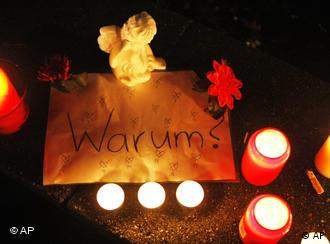 Police are unsure why the killer acted out

One day after a 17-year-old burst into his former school and opened fire, killing nine students and three teachers, one very big question remains: why did he do it?

For investigators on the case, one thing has stood out: the majority of the victims were female. All but one of the nine students, aged between 14 and 16, were girls, and the three teachers gunned down were all women.

Heribert Rech, interior minister of the German state of Baden-Wuerttemberg, where the crime was committed, said he didn't want to draw conclusions, telling journalists that could have been based on how the classes were drawn up.

However, Rech did admit that the fact that most of the victims were killed with a shot to the head indicated that they were not random targets.

Portrait of a killer 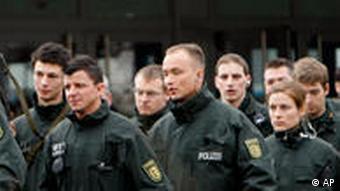 Police are examining the gunman's computer looking for answers

The perpetrator, identified only as Tim K., was described by school officials as being an unremarkable student.

He had achieved average marks on his school leaving certificate and had then enrolled in a course to become a salesman. Tim K. also regularly worked out at the gym and belonged to a sports club.

However, a 19-year-old neighbor, who identified himself as Michael and said he used to play table tennis with the gunman, told the Reuters news agency that Tim K. was a loner who had a big collection of horror films.

Germany has strict gun control laws. Yet police say the gunman had used a nine millimeter pistol registered to his father, a member of a gun club who has a collection of 15 guns at home.

After a school shooting in Germany in 2002, many schools have implemented plans laying out what to do in the event that a gunman should attack the school.

Authorities are reporting that once the gunman entered the school, the principal announced a coded message on the public address system, saying, "Frau Koma is coming."

One student, identified only as Kim S., told ZDF television that their teacher shut the door and told them to close the windows and sit on the floor. 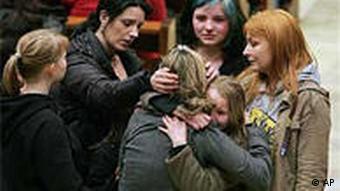 In addition to finding the motive of the killer, many in Germany are wondering how these types of attacks can be prevented in the future.

Wilhelm Heitmeyer, a sociologist who specializes in school violence, told Deutsche Welle that the best people to identify a potential attacker are fellow students.

"We see that a lot of the perpetrators are very isolated and they speak out about violent acts," he says, "And it's the peers, and not the teachers, who are going to notice this the most."

Heitmeyer warns, however, that what actually triggers these people to finally act out is a mystery. Talking about these attacks more openly with students of all ages is the best way to prevent them in the future, he says.

Germany was a nation in mourning Thursday as people struggled to come to terms with Wednesday's school shooting in the state of Baden-Wuerttemberg that left 16 people dead, including the teenage gunman. (12.03.2009)

Observers Say Germany Must Be Better Prepared for School Shootings

Germany reeled with shock after a 17-year-old gunned down students at a school in a rampage that left 15 dead before he took his own life. But now some are also saying the country needs to learn from this latest tragedy. (11.03.2009)

Police in Stuttgart have confirmed the death of a gunman in a school-shooting incident that left at least 15 victims dead and several injured near Stuttgart in the southwest of the country. (11.03.2009)