Police Arrest One Suspect in German Train Bomb Probe | Germany | News and in-depth reporting from Berlin and beyond | DW | 19.08.2006

German prosecutors confirmed Saturday that one of two men suspected of planting two bombs found on German trains last month was arrested in a police swoop on the railway station in the northern city of Kiel. 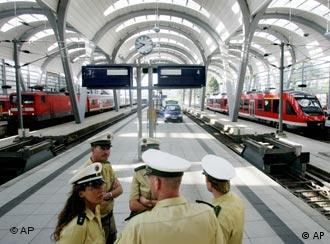 Police sealed off the Kiel railway station on Saturday

News reports in Germany said that German police had arrested one of the two suspected suitcase bombers at the railway station in the northern city of Kiel on Saturday. The authorities also found explosives at the station, according to German public broadcaster ARD.

"The person appears to be one of the two suspects that have
been sought since yesterday with the help of video footage that was made public," the federal prosecutor's office said in a statement. 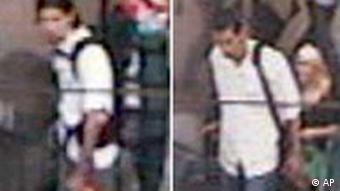 German police are searching for these two men

German police are hunting for two men suspected of planting two homemade bombs packed into suitcases on July 31 in trains in the western cities of Dortmund and Koblenz. The bombs however failed to detonate. Investigators first thought that the devices were a blackmail attempt, but analysis of the contents revealed a possible link to Lebanon.

"We are now working on the basis that this was the work of a terrorist group based in Germany and that it was an attempt to kill a large number of people," Rainer Griesbaum, a federal prosecutor, told a press conference Friday.

Rail traffic was suspended in Kiel on Saturday morning as "a measure in the current investigation by the federal police," a spokesman for the regional police said. He gave no further details.

Bombs would have created "a fireball"

The head of the Federal Crime Office, Joerg Ziercke, said the bombs were packed into identical black cases and consisted of gas canisters, alarm clocks, wires and batteries and soft drink bottles filled with a flammable liquid.

"The cases had been supposed to explode 10 minutes before the trains arrived at the stations," Ziercke said. "It's more likely than unlikely that there was a terrorist background," he said. If the around 25-kilo (55-lb.) suitcase bombs had exploded they would have lead to "a fireball" in the train carriages and an "indeterminate number of injured and possible deaths," Ziercke said.

He added that a 100-strong team of investigators was still trying to establish why the devices failed to explode.

A note in the case found in Koblenz contained Arabic writing and a telephone number in Lebanon, and packets of starch with labels in Arabic and English were also found.

The cases containing the bombs were unaccompanied when they were discovered, but closed circuit television cameras recorded pictures of two dark-haired young men, one wearing a Germany football shirt, carrying rucksacks and wheeling the suitcases on to platforms at the Cologne railway station.

The two men seen on the grainy images have been described as being from "southern countries."

Investigators are offering a reward of 50,000 euros ($64,000) for any information leading to the arrest of the men.

Speaking in Berlin Friday, German Interior Minister Wolfgang Schäuble also warned that Germany should brace itself for similar attempts. "Unfortunately, we must assume that the danger of a repeat of these attempted attacks."

The discovery of the two bombed sparked a series of scares at railway stations across Germany with parts of the central station in Düsseldorf sealed off Friday after a suspicious suitcase was found. Officials in Düsseldorf later gave the all-clear, saying it had been a false alarm.

The BKA suggested that Germany was being targeted for attacks possibly by a terrorist organization operating in the country. If the explosive devices had been detonated, their size and construction would have created devastation and death on a scale reminiscent of the July 7, 2005 attacks on the London transport system, according to a report in the Süddeutsche Zeitung newspaper.

Both of the suitcases discovered on July 31 contained gas cylinders rigged up to an ignition mechanism and had been left in two regional trains which usually run at the height of the commuter rush hour. The suitcases were discovered by rail staff when the trains terminated at the two hub stations. The construction of the devices and the potential impact the explosions would have had suggests a sophisticated plot. 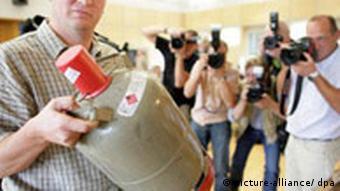 A German security official with one of the canisters

Investigations by BKA engineers revealed that the bombs were designed so that simultaneous detonation would have been possible and that they would generate "an explosive force so big that the explosion would have reached the dimension of the subway attack on London in the summer of 2005," a high-ranking security source told the newspaper.

In the London attacks, 52 people were killed and over 700 were injured when suicide bombers struck on three underground trains and a bus.

The investigation has fired an intense debate in Germany regarding the expansion of video surveillance in railway stations and in trains. Some German states have already taken steps to increase their "big brother" security systems. 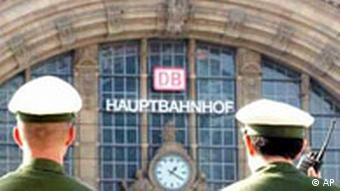 Opinions differ on what measures should be taken

In Brandenburg, Interior Minister Jörg Schönbohm of the Christian Democratic Union (CDU) said that the state was considering limiting surveillance to people getting on and off trains in an attempt to dodge the controversial topic of data protection.

However, federal data protection czar Peter Schaar has pleaded for more to be done, with extra staff and cameras placed at all railway stations and on trains to increase security.

German federal prosecutors are investigating a possible terrorist link to two unexploded bombs discovered in Dortmund and Koblenz. The devices could have caused serious injury or death if they had exploded. (Aug. 2, 2006)

Germany On Guard for Terrorism Linked to Mideast

German politicians have warned that the Middle East crisis could inflame the Muslim community in Germany and increase the risk of militant Islamist attacks. (Aug. 9, 2006)