Police Accused of Alleged Brutality at Cologne Anti-Islam Rally | Germany| News and in-depth reporting from Berlin and beyond | DW | 24.09.2008

Allegations of police brutality and human rights abuses by law enforcement officers in the German city of Cologne have surfaced in a news report. 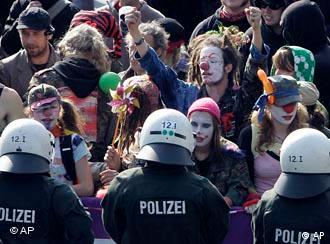 No clowning around: The police are accused of dealing with protestors with a heavy hand

The alleged abuses, including putting children and adolescents in cages, are supposed to have taken place during a demonstration against a far-right "Stop Islam" conference in Cologne last weekend.

The police were confronted before, during and after the event -- eventually abandoned on public safety grounds -- by extreme leftists who attempted to reach the square during the planned rally by anti-immigrant group Pro Cologne.

Der Spiegel magazine alleged on its Web site that hundreds of protestors, including 72 teenagers and three children, were taken to a detention center in the nearby town of Bruehl, and some had to stay in open air cages despite the cold temperatures.

The protestors said about 30 of them were kept in a 36 square-meter (388-square-foott) cage, and some of the teenagers were not allowed to call their parents or use the toilets, Der Spiegel Online said, adding that a lot of them were not released until the early hours of Sunday morning.

Cologne police chief Klaus Steffenhagen said the police would look into these claims by the protestors, and suggested that the young people may have been held for a long time because their parents lived far away and were not aware of their youngsters' participation in the demonstration.

The Pro Cologne rally, against plans to construct a grand mosque in the city and the general "Islamification" of Cologne, was supposed to take place on the old market square of Heumarkt.

Only 50 supporters of the far-right managed to reach the proposed site for the rally after some 5000 mostly peaceful demonstrators had blockaded every entrance to the square.

Violence flares before, during and after rally 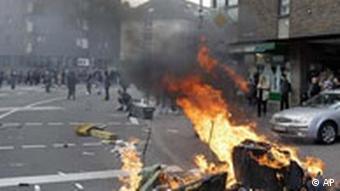 But the violence of the previous night which had seen a far-right official shoved and punched and a river cruise boat pelted with stones after the rightists hired it as a venue for a news conference, erupted again on Saturday when the radical left fought running battles attacks with the police and carried out more destruction of public property.

Some 3,000 police, drafted in to control the protests and seal off part of the old city, used truncheons and water hoses to fend off the violent "anti-fascist" leftist activists.