Tensions between Germany and Poland over WWII reparations are heating-up. On Friday, the Polish parliament voted to seek damages from Germany. 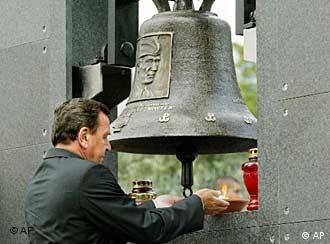 Symbolic atonement may no longer be enough to appease the Poles

The lower house of the Polish parliament voted unanimously on Friday to seek compensation from Germany for damages suffered during World War II. The resolution passed with a vote of 328-0, with one abstention.

"Poland has not received its due financial compensation or war damages for the enormous damage and material and nonmaterial losses caused by the German aggression, occupation, genocide and loss of independence," the resolution said. More than 6 million Poles were killed during the Nazi occupation of the country.

At the same time, the resolution stated that the Polish government had "no financial obligations whatsoever toward German citizens," thereby rebuffing recent claims by German groups like the Prussian Claims Society to be compensated for property lost when the Polish borders shifted westward at the end of the war.

The flap between the two neighbors -- an issue since the fall of the Berlin Wall in 1989 -- has heated up since Poland joined the European Union in May of 2004.

German Chancellor Gerhard Schröder tried to sooth irritated Poles, who have little sympathy for Germans forced to flee the far eastern regions of the country when they were transferred to Poland at the end of the war. The claims of those displaced and their descendents have only opened old wounds, with many remembering the widespread devastation inflicted by the Nazis, including the almost complete destruction of the capital Warsaw.

On a visit to the Polish capital last month, Chancellor Schröder said he would urge German courts to reject claims made by the Prussian Claims Society and similar groups. But that does not appear to have been enough to put a lid on the issue; today's resolution is considered a direct reaction to German claims.

The resolution is largely symbolic, not binding, and is largely considered to be an attempt by parliamentarians to put pressure on Polish Prime Minister Marek Belka to bring up the issue with Chancellor Schröder directly.

Germany could be asked to pay billions

The foreign ministry declined to comment on the latest developments, saying Schröder's speech in Warsaw made their position clear. A member of the opposition Christian Democrats and expert on Poland, Claudia Nolte, however, said the move "unnecessarily escalated" bilateral relations.

Should Germany be forced to pay reparations, the cost could exceed €525 billion ($640 billion), according to the latest estimates.

Exactly 65 years ago, on Sept. 1, 1939, German troops crossed the border into Poland. The attack caused the outbreak of World War II -- the single biggest catastrophe of the 20th century. (September 1, 2004)

Moves by Berlin to recover money paid to ethnic Germans who lost property in Poland at the end of World War Two, along with lawsuits threatened by expellee groups, threaten to hurt ties with Warsaw. (September 6, 2004)

Germans driven out of Poland at the end of World War II said Tuesday they would file a lawsuit this year to reclaim their assets, aggravating an already bitter debate between the wartime foes. (August 3, 2004)