The remains of more than 2,000 German civilians discovered in a mass grave in the town of Malbork in northern Poland have been reburied at a ceremony at one of the country's German military cemeteries on Friday. 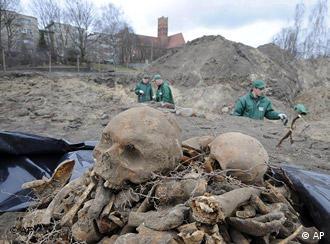 The bodies from the mass grave were taken from Malbork

The victims are believed to have been caught up in the Russian army's offensive in what was then the German province of East Prussia in the final stages of World War II; a province split between Poland and Russia after the war.

The ceremony was attended by a group of Germans who fled the area, as well as Polish officials who meant to make the event a symbol of reconciliation.

One of those survivors, a 74-year-old Hamburg resident named Sabina, lived in Germany's easternmost province of East Prussia with her family until the last throes of the war. In the harsh winter of 1945 they caught the last transport bound for the west to escape the Red Army's offensive which was moving in from the east. According to Sabina, they managed to scramble onto a crowded goods train in the town of Marienburg, now Malbork, and make it to safety. But many others were not so fortunate. The station was packed with civilians desperate to get out as the train was leaving.

"There were children there who had marched for days down icy roads with nothing to eat," Sabina told Deutsche Welle. "Many of the civilians were clearly too weak to go on. There were stacks of frozen bodies lying in ditches all around the station."

Little was known about what happened to those who were left behind after the Russians captured the town until a mass grave was discovered in Malbork last autumn. In it were more than 2,000 bodies. Based on local records, in the town of Malbork alone, 3,000 local German residents were unaccounted for after the end of the war, not counting the thousands who passed the town during the chaotic evacuation. 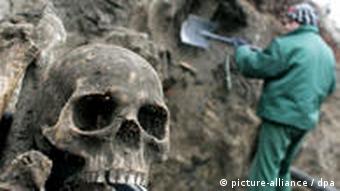 The dig revealed the resting place of Malbork's Germans

The victims were first thought to have been shot dead by the Russians, since bullet holes were found in the skulls of some bodies in the upper layers of the mass grave. There is speculation that they may have been German prisoners of war ordered to bury the bodies, and then executed by the Soviets. Most bodies buried lower down, however, appear to be of Germans who died during the evacuation.

The discovery of the grave was made by accident during the construction of a hotel next to the historic Malbork castle.

Archeologist believes victims were not executed

"I have no doubt that the majority of the victims were civilians whose bodies were dumped into a bomb crater," said Zbigniew Sawicki, an archeologist who was in charge of the exhumation. "The large number of children's remains points to that. There are no traces of a mass execution."

The local public prosecutor's office as well as representatives of the Polish National Remembrance Institute are convinced that the manner in which the bodies were buried corresponds to the way in which the Red Army disposed of the bodies of German civilians in other towns before they were handed over to Polish administration.

The remains of the bodies discovered in Malbork were transported for burial to one of Poland's 13 cemeteries for German soldiers at Stare Czarnowo, 300 kilometers to the West of Malbork. The organizers of the burial decided to focus on the human side of the tragedy of World War II in the spirit of reconciliation.

One middle-aged Malbork resident who visited a local cemetery where the remains were temporarily stored was quoted by a national newspaper as saying 'These were innocent people who should be treated with respect and have a proper burial.'

A spokesperson for the Polish organizers of the funeral described Stare Czarnowo as the most appropriate site, since 1,000 German soldiers and civilians are already buried there, and the cemetery is cared for jointly by Poland and a German organization that looks after German war graves abroad.

German authorities are to begin excavating a site believed to contain the remains of more than 750 Jewish prisoners slain by the Nazis in the final days of WWII. (22.04.2009)

The remains of 1,800 bodies were exhumed from a mass grave in a Polish city that was part of the German Reich during the war. Historians believe the victims were German residents of the town. (25.01.2009)