Barcelona's new mayor has temporarily halted new licenses for tourist accommodations. Ada Colau wants to help draw up new regulations to govern a sector that some say has grown too big in recent years. 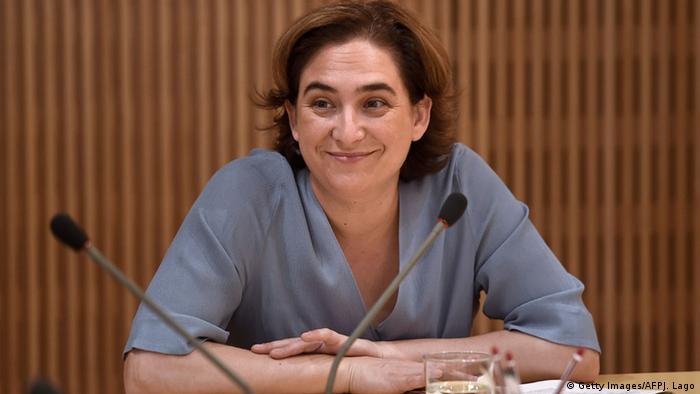 On Thursday, Barcelona Mayor Ada Colau temporarily suspended licenses for new hotels, hostels and private tourist apartments, a moratorium that will affect about 30 current applications. Colau made mass tourism a central issue while serving as spokeswoman and leader of Barcelona in Common, which won the most votes in May's municipal elections, unseating center-right Catalan nationalists. Backed by the Podemos movement, Colau has gotten right to work on the issue since being sworn in on June 13.

"It was necessary to put things in order," she told reporters on Thursday.

Barcelona received a record 7.5 million visitors last year, behind only London and first-place Paris in Europe, but many of its 1.6 million residents complain that the cost of living is rising out of reach as property owners hike rents for transient tourists and the capital of semiautonomous Catalonia has begun to lose its character. On Catalan radio, Colau said officials had had to instate the moratorium "because tourism is an asset of the city that had to be cared for and done sustainably - and one that has generated tensions."

'Not a theme park'

By early 2016, after studying the economic impact of Barcelona's existing accommodation capacity, the town hall plans to initiate public debate on how to distribute tourists throughout the city and break up holidaymaker ghettos like the seaside Barceloneta neighborhood, which symbolizes vacation excesses.

Last summer, as social media circulated pictures of a trio of well-muscled Italians prancing around the Barceloneta neighborhood in the buff, Colau accused tourists of failing to realize "they were in a city, not a theme park" in an opinion piece that ran in "The Guardian" and other international press. Residents took to the streets to complain about a general increase in nudity, public drunkenness and noise, and even asked the owners of accommodation rentals to think of their longtime neighbors and shut down their businesses.

"Any city that sacrifices itself on the altar of mass tourism will be abandoned by its people when they can no longer afford the cost of housing, food and basic everyday needs," Colau, a Barcelona native, wrote. "If they manage to stay, they have to put up with noise and pollution that are difficult to combine with daily life," she added. "It's paradoxical, but uncontrolled mass tourism ends up destroying the very things that made a city attractive to visitors in the first place: the unique atmosphere of the local culture."

Spain to comply with EU ruling on mortages and evictions

The European Union’s top court has ruled that Spain’s mortgage laws are in breach of the bloc’s regulations. The ruling was welcomed by homeowners struggling to pay off their debt. (14.03.2013)