A picture book evokes strong memories in elderly Germans with dementia. For the author and illustrator, taking patients from the Weimar Republic to the 1960s was a challenge particular to Germany. 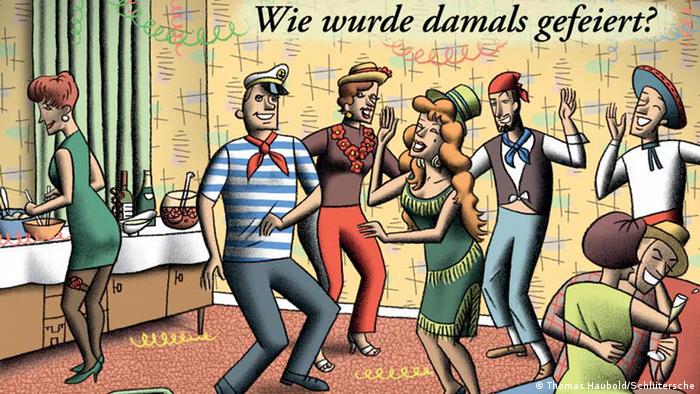 For Beate Wolf, the "ah ha!" moment came after years of working in assisted care. Her tasks involved visiting the homes and apartments of dementia patients and assisting them in practical activities. "Conversation, peeling potatoes, going shopping," Wolf said. "Those are last things they hold onto."

During one of those visits an elderly patient became increasingly animated by her own storytelling. Jumping to her feet, she shouted, "I could write a book about my life!" Though the woman didn't end up writing that book, Wolf, in her own way, did.

Calling "That Brings Back Good Memories!"an illustrated picture book might sound odd; typically, picture books are for children. But even as "Memories!" - originally entitled "Daran erinnere ich mich gern!" - is unequivocally for the elderly, a picture book is what it is.

The illustrations by Thomas Haubold aim to rejuvenate memories, elicit anecdotes, and breathe color into autobiographies that are rapidly fading away. At its best, it allows those with dementia to retain, or even regain, a sense of identity. On each page, every article of clothing, piece of furniture, product, or "modern" appliance is meticulously placed. They are symbols to elderly Germans, and each is packed with meaning. 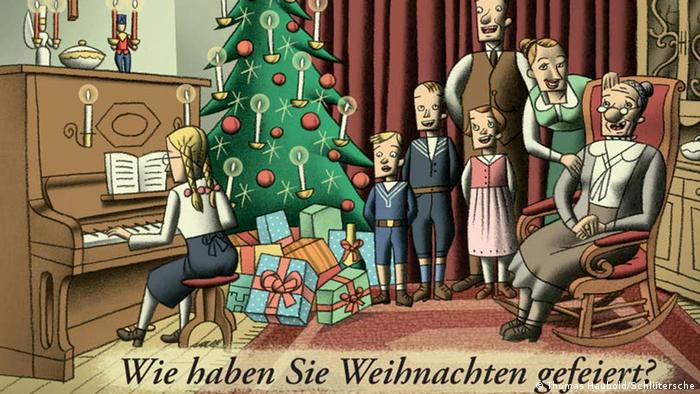 "How did you celebrate Christmas?"

What most elderly Germans note from the above picture are the boys' Matrosenanzuge, or sailor's suits, popular in Germany in the 1950s. On top of the piano, there are two carved wooden figures that many would also recognize. They would have been carved in the Erzgebirge region, close to the Czech Republic.

"In the 50s and 60s, people got them from relatives who lived in East Germany," said Haubold. "They often came with small carousels and candles." On a subsequent page is a picture of a Räuchermännchen, a nutcracker-sized figure that, when lit, pours real smoke from his pipe.

The associations evoke strong and often tangential memories. "One might say, 'That dress, I used to have that dress, I went to a graduation dance in a dress like that,'" said author Beate Wolf. "The caretakers then learn things they never knew before, whether it's a special kind of tea the patient enjoys, or even a dog they had at home."

The 32 pages of hazy, pastel illustrations begin in the 1920s and then meander, as pleasantly as possible, through scenery and symbols of the 30s, 40s, 50s and 60s. These were foundational years for those now suffering from dementia. Considering the major events in Germany during this time, eliciting positive memories from these decades was not easy task for Haubold and Wolf. 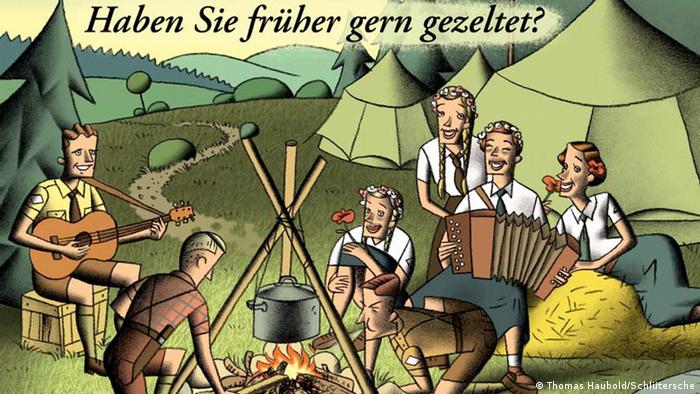 "Did you used to go camping?"

The Weimar Republic was a time of unemployment, hyperinflation, and post-World War I reparations payments. One of the difficulties for Haubold and Wolf was to navigate around the most traumatic experiences. "We tried to keep the negative things out, to not confront them. Many of these people lost their loved ones or were attacked during that time."

However, they didn't skirt the tough issues entirely. In an otherwise pleasant camping scene replete with a campfire, guitar, accordion and bales of hay, boys and girls wear uniforms of the Hitler Youth. "If there's someone who would like to speak about National Socialism, they can. But they absolutely don't have to. No one has to. That's what the picture more or less offers," said Wolf.

"Negative memories can do real damage to those with dementia," she continued. "That's not constructive. That's not the goal. Wherever possible, we sought images that have positive emotional effects." 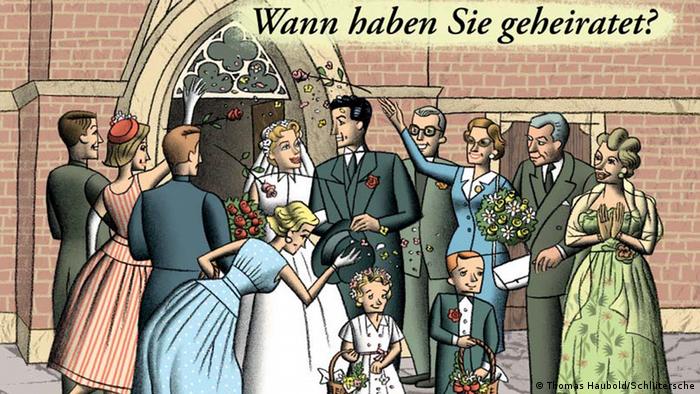 "When did you get married?"

At St. Martinus Stift, an assisted care facility for those with Alzheimer's and dementia in the small city of Emmerich am Rhein, 29-year-old Eva Wienhoven has been using the book with groups of four to five patients. "They mostly react positively, actually only positively so far," she said.

All of which raises the question: Does illustration - or art generally - have a stronger impact on those with dementia than, say, antique objects from the real world? Couldn't a book with 50s-era photographs help to recover memory just as well?

Wienhoven doesn't think so. "They really hit that time period with this book, even the colors. A photo or an object can only capture a moment, it's more subjective. With illustrations you can really get a kind of overarching theme."

The book's goal of bringing back positive memories seems, anecdotally, to be working. "One woman said, 'Oh, we always had chickens in the yard. And whenever we made brandy once a year, we always got the fruit from the brandy jar and gave it to the chickens. Afterwards they got so drunk they ran around the yard like crazy!'" recounted Wienhoven. Chickens, it turns out, are the woman's favorite animals.

A man whose 88-year-old parents both have dementia reads the book at home, mostly with his father. He strongly recommended the book in an online commentary by writing, "The pictures are helpful and support the memories he still has - together with me and with the caretakers. The different stations of his life come back easily, insofar as his capacity for remembering allows it. He ends up grabbing for the book himself."

Click through the picture gallery below for a closer look at Beate Wolf and Thomas Haubold's book.

Art addresses inherently human themes like love and family. A Berlin museum taps into the power of art and offers specialized tours to help dementia patients get in touch with their memory. (02.10.2012)

A neighborhood in the Dutch town of Weesp has been created to house people suffering from Alzheimer's and other forms of dementia. It's described as a pioneering approach to mental healthcare. (16.03.2012)