Picking Designer Homes Off the Rack | Business| Economy and finance news from a German perspective | DW | 28.04.2005

The tarnished image of prefabricated housing may be getting a shine in Germany, with a rash of ultra-modern designs on the market. But will a new look be enough to counteract German prejudice? 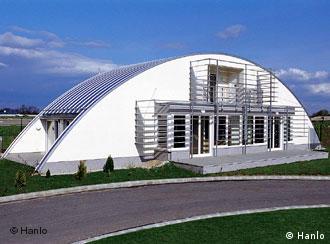 Typical German houses tend to have something of the fortress about them, with thick masonry walls that are made to stand for generations. For most Germans, prefabricated, timber-frame houses are seen as a second-rate option: cheap to build and quick to fall apart.

A prefabricated house can be compared to buying clothes off the rack instead of having them made to order. The various elements of a house -- nearly always made of wood -- are cut to specifications in factories. These are then assembled, sometimes within days, at a building site.

But the notion that "prefab homes" are cheaply made and are cookie-cutter solutions for low-end buyers is changing. In the past decade, prefab houses have become more diverse and individualized. They lead the industry in terms of energy efficiency, ecologically sound building techniques, and technical advances.

And now, thanks in part to some star architects, they are improving their image in terms of design as well. In the past few years, architects such as Gustav Peichl, Matteo Thun and Frank Gehry have turned their hand to designing "off the rack" houses, with surprising results. 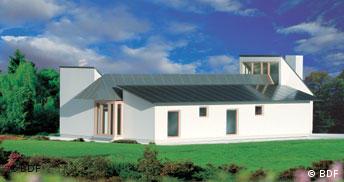 The single-family Peichl-Haus, an arched, zinc-roofed building slightly reminiscent of a quonset hut, was designed for the Hanlo company by the Viennese star architect Peichl, best known for grand public buildings like the Bundeskunsthalle, Germany's national art museum.

Frank Gehry, who created the Guggenheim Bilbao, has designed "Court Yard House" for the German firm WeberHaus (above).

And Milan based star Matteo Thun -- who founded Italy's Memphis design group and led the creative team at Swatch for several years -- turned out 'o sole mio' (below), a pent-roofed marvel of passive-energy use, for Austrian firm Griffner Haus. 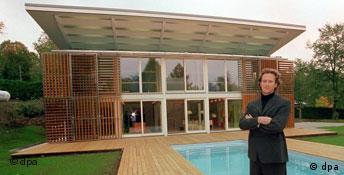 Houses like the sleek, cubist mini-home "Option," from WeberHaus (below, right) -- just 66 square meters (710 square feet) --- and Baufritz's modern, L-shaped energy-saving home "Terra 2" (below) are two further examples of houses that have taken home design awards in the past few years, even without star architects behind them. 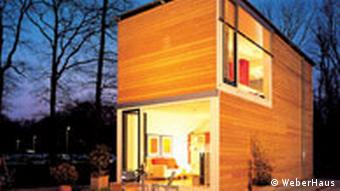 The 66 square meter Option, by WeberHaus

The new design effort is aimed at punching up the image of prefabricated housing in Germany, in order to attract a new clientele, said Christoph Windschief, spokesman for the German Prefabricated Housing Association (BDF). Many Germans feel that houses built in wood -- as is the case with most prefab houses -- are inferior to homes built of stone or cinderblock, known as massivbau. 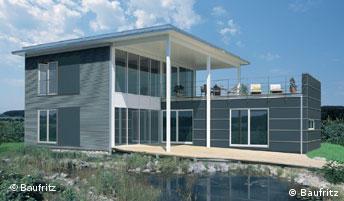 A prefabricated half-timbered house containing wood, glass and steel elements can run into the millions, he added. The higher prices reflect an attitude change on the part of the makers of prefab housing. "The companies want their own products to be more valuable, more appropriate to people who can afford a house," Windschief said.

'Key in the door'

So if it isn't necessarily cheaper, why choose it? There are a number of reasons, said Dieter Langschwager, executive assistant at Hanlo, the company that commissioned the Peichl House.

First off, the building process is simplified. "Everything is centrally organized. The builder doesn't have to deal with one company for the walls, another for the roof, another for the electricity and another for the paint. You get it all, finished. In the end the key is in the door," he explained.

"Because of the timber frame walls with insulation, prefabricated houses are more energy efficient," Windschief explained. They also tend to be on the cutting edge of technology in terms of using passive and solar energy, as well as "healthy home" building materials. And, he added, prefabricated house makers are the leaders in developing "smart homes," in which multimedia devices and electronic controls are part of the construction.

Despite their positive attributes, just 13 percent of homes built in Germany are prefabricated, according to Alexander Oswald, who keeps statistics for the BDF. This number has held pretty much steady over the past ten years, a fact he attributes to the German "conservative way of thinking."

Yet in Scandinavia, where houses have always been built in wood, between 70 and 90 percent of new homes are prefabricated, Oswald said. And even in Austria, which shares a border and a good deal of cultural history with Germany, one-third of all new homes are prefab. "It seems they don't share the German prejudice about building with timber," he added.

For his part, BDF's Windschief blamed the prefab housing industry for not doing a good enough job in promoting itself. "Its something we have to work on," he said.

But while the designer homes may be turning heads, Windschief noted traditional designs still prevail when it comes to actual home building. "Germans generally don't want extravagant house design -- they tend to go for tradition," he said.

Hanlo's Langschwager noted that when the Peichl House came out, in 2000, "it got a lot of attention... We had more than 1,000 enquiries." In the end, though, the house was only built twice -- in Austria. The problem? It didn't meet building codes in most German neighborhoods.

This points up a problem for many of the prefabricated houses, especially those with "exotic" design. "Often, these houses can not actually be built," Langschwager noted. "The building codes are strict. The roof may have to have a certain slope, to fit in with the buildings around it." 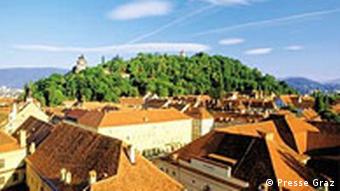 Most German houses have peaked roofs

Yet many of the designer houses rely on a pent roof -- one that is curved or only very slightly angled -- to make the best use of passive energy sources. Typical building codes in Germany call for gabled roofs, with 60 degree angles. This may explain why only 20 percent of the prefab houses sold in Germany are the designer type, according to Windschiefer.

Despite the eye-catching new designs, it seems prefabricated houses face an uphill public relations battle in Germany. Take the case of Ingo Bauer, a Cologne based businessman who recently spent a troubled year having a house built to his specifications. Would he perhaps have been better off with a prefabricated house? Did he even consider it?

"I would never consider a prefabricated house," he said. "They're made of cheap materials and slapped together like Lego blocks. You can't compare the quality, even if they are cheaper. ... Also, I can spot a prefabricated house a mile away -- they have thin walls that look like cardboard. I just don't like houses with thin walls."

Despite their strong architectural tradition, very few Germans get to build important projects abroad. But at this month's architecture biennale in Venice and at similar events, they're trying to change that.(Sept. 9, 2004)

More than a dozen defendants stand accused of smuggling Syrians through the so-called Balkan route since 2019. Coordinated raids early on Tuesday involved hundreds of officers across several cities and states.