Photographer Martin Schoeller gets 'Close Up' 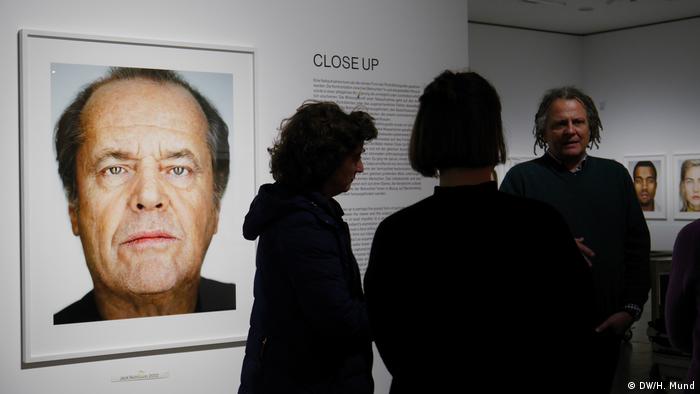 Due to the coronavirus restrictions, there will be no opening event for the new Martin Schoeller show, but the public can come and admire the 40 large format photographs at Berlin's Camera Work photo gallery as of June 20 — and online, too, of course.

Schoeller learned the art of photography at Berlin's Lette-Verein organization for applied arts. In 1993, he moved to New York, where he spent three years working for star photographer Annie Leibovitz, travelling the world, meeting film and music industry celebrities.

The young German freelance professional photographer developed a style of his own and offered his work to print editors. "At the beginning, the editors didn't understand my close-ups at all," Schoeller told DW. "At the time, I mainly photographed friends. ... until an editor gave me a photo opportunity, a shoot with Vanessa Redgrave."

The Redgrave shoot catapulted him into another league from one day to the next. "In 1998, I photographed three weddings and had a badly paid still-life job," he recalls. A year later, "I suddenly had 127 jobs, which was overwhelming. I slept for an average of four hours in those days because there was so much to do," Schoeller says, still amazed decades later at how his career skyrocketed.

Humor is part of the work

Today, a team of employees and assistants work with the internationally renowned photographer. They prepare for the photo shoots, but when it is time to load the many lamp and camera cases, Schoeller is there to pitch in. The 52-year-old German is by no means stuck up. Humor is part and parcel of the job, he says; it helps provide the precision he needs to be a professional.

Martin Schoeller was born in Munich in 1968 and grew up in Frankfurt. His father was a well-known TV journalist and literary critic, his sister is a writer and film director — arts and literature were always part of his family life.

Martin was interested in photography. His education at the Lette School is still his foundation today; the serial works of August Sander and Bernd and Hilla Becher had a lasting influence on his view of photography as an art form — in other words, first-rate craftsmanship.

Reporter for The New Yorker

A photo shoot with skateboarding world champion and YouTube star Tony Hawk snagged the young photographer from Germany a steady job with The New Yorker. "I was employed there as a photographer for 13 years," he recalls.

His super-close ups and staged portraits with celebrities grace the front pages of international magazines, from Time to Vanity Fair, from the renowned New York Times and Germany's Stern to Rolling Stone music magazine. In 2000, Life honored him with its "Best Talent" award.

Martin Schoeller travels tirelessly around the globe for photo shoots and projects of his own. He is a regular photo reporter for National Geographic, which allowed him to work on "Identical," a project involving portraits of twins. He has lucrative jobs and he has often generously donated his proceeds, for instance for the portraits he took of homeless people and transgender women.

Much in demand around the world

His works have been shown in exhibitions for 15 years. The first show was in 2005 at the Camera Work gallery in Berlin, his exclusive representation in Germany. Museums and galleries in New York, Boston and Beverly Hills have showcased his work.

Martin Schoeller has three exhibitions this year in Germany. Zeche Zollverein in Essen is showing "Survivors," photos of 75 Holocaust survivors in Israel in close cooperation with the Yad Vashem Memorial.

The NRW-Forum in Düsseldorf is showing his work until September, including portraits of death row exonerees whose faces show traces of the tough lives they have led. It took him a long time to build trust with the protagonists. The impressive works go far beyond the scope of conventional portrait photography — he has captured lifelines.

Camera Work in Berlin exhibits familiar works as well as completely new ones, including portraits of German celebrity artists, filmmakers and musicians.

A photo exhibition titled "The New Abnormal" at the Museum Deichtorhallen in Hamburg tells of the horrors of war and the will to resist.