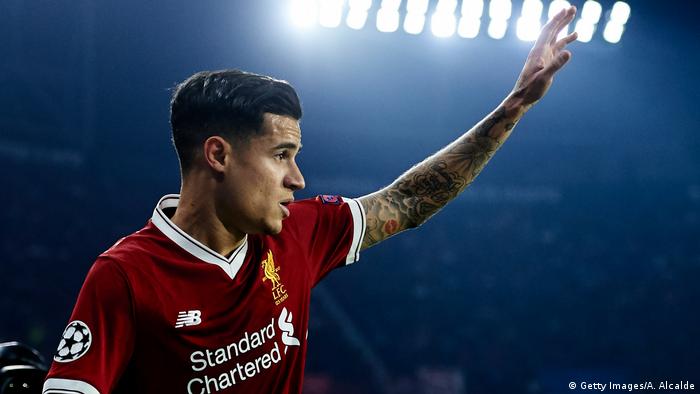 "Barcelona and Liverpool have reached an agreement for the transfer of Philippe Coutinho," Barcelona said in a statement. "The player will sign a contract for the rest of the season and five more years with a release clause of 400 million euros."

"It is with great reluctance that we — as a team and club — prepare to say farewell to a good friend, a wonderful person and a fantastic player in Philippe Coutinho," Liverpool's German manager Jürgen Klopp told the club's official website. "It is no secret that Philippe has wanted this move to happen since July, when Barcelona first made their interest known."

Coutinho is expected to travel to Barcelona on Sunday and watch his new teammates host Levante that afternoon at the Camp Nou.

The Brazilian became a key figure at Liverpool almost immediately after joining the club in January 2013 from Inter Milan for around €13 million. The Brazilian netted 41 goals in 152 Premier League appearances for Liverpool, including seven in 14 matches this season — one for the big games, he was particularly prolific against other leading Premier League clubs.

Read more: Can: 'Everyone has fallen in love with Klopp'

His record in the Champions League was even more impressive, as he helped Liverpool qualify for the knockout stages after five goals and two assists in five group stage games.

Where he slots into Barcelona's midfield — which includes the likes of captain Andres Iniesta, Sergio Busquets and Ivan Rakitic — remains to be seen. Coutinho's arrival will likely have the strongest impact on Iniesta, who, at 33, is in the closing stages of his career at the top level. It's also conceivable the Brazilian adopts a more attacking role, in place of his departed countryman Neymar.

The Catalan giants will also almost certainly part ways with at least one of their second-choice midfielders, such as Andre Gomes or Arda Turan.

Known for his long-range strikes, his presence will give Barcelona an extra attacking edge particularly against teams that like to sit back and defend.

Second most expensive, for now

Coutinho's transfer technically makes him the second-most expensive player of all time behind compatriot Neymar, who signed from Barcelona to  Paris Saint-Germain last summer for an eye-watering €222 million.

French striker Kylian Mbappe is currently at loan at PSG from Monaco, but is expected to complete a €180 million transfer this summer in a deal structured to ease the financial burden on French club this year.

Coutinho leapfrogs his Barcelona teammate Ousmane Dembele as the second most expensive player of all time. The French winger signed for the Catalan giants from Borussia Dortmund last summer for €105 million.