American composer Philip Glass has created an ambitious new opera which is critical of the US invasion of Iraq. "Waiting for the Barbarians" premieres on Saturday in the eastern German town of Erfurt. 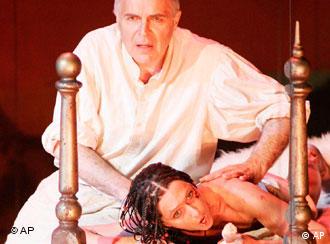 A political thriller about the unspeakable acts of cruelty

Erfurt, a small city in the eastern German state of Thuringia, will put itself on the world opera map this week with the premiere of a new work by American minimalist composer Philip Glass.

"Waiting for the Barbarians," a harrowing allegory of oppressor and oppressed based on the novel by 2003 Nobel laureate John Maxwell Coetzee of South Africa, opens Saturday at the new Erfurt Theater.

The theater, under the direction of Guy Montavon, commissioned the work, which is Glass' 15th opera.

Richard Salter as"Magistrate" (right) and Eugene Perry als "Joll, officer" during a rehearsal for "Waiting for the Barbarians"

Cruelty on the border

The story's main protagonist, the Magistrate, is a loyal servant of the Empire, running the affairs of a tiny frontier settlement in an unnamed country for years and ignoring the ever-present threat of war with the "barbarians," a nomadic people demonized by his own regime.

Shocked by the Empire's cruel and unjust treatment of prisoners of war, the Magistrate commits a quixotic act of rebellion that brands him an enemy of the state, rendering him an object of public humiliation and torture.

Montavon said that the two-hour opera, with a libretto by Christopher Hampton, contains 20 scenes and follows the novel closely. Six performances are scheduled.

British baritone Richard Salter takes the lead role, while the cruel Colonel Joll will be sung by US baritone Eugene Perry, who has starred in a number of Glass operas.

The sets for "Waiting for the Barbarians" are by George Tsypin

Allegory of the Iraq war

The composer sees the work as a criticism of the Iraq war led by US President George W. Bush -- something that made it all the more surprising for Glass when the opera was invited to hold its US premiere in Austin, Texas in January 2007.

"We were very surprised by the invitation", he told Germany's DPA news agency.

"But Austin isn't Texas," he said, adding that Bush's policies were not as hotly disputed now as during the height of the war in Iraq. 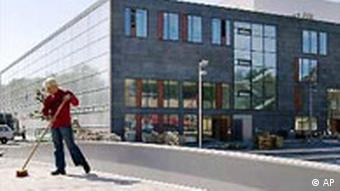 Glass praised the Erfurt theater for staging the work and for its commitment to contemporary music theater in general.

He also lauded the theater's musical standards, noting that the chorus and orchestra were able to recreate his sound world without any difficulty.

"This sort of openness is not always found in other opera houses," he said. 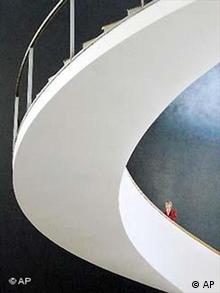 Erfurt managed to entice US maestro Dennis Russell Davies -- who has conducted many Glass premieres -- for the production.

"He is the best midwife for my pieces," the composer said.

The sets are by Russian theater designer, George Tsypin, and the costumes are by German designer Hank Irwin Kittel.

Glass said he likes to maintain links with opera houses that have performed his works and he could imagine returning to Erfurt in the future.

Opened in September 2003, the Erfurt Theater took four years to build. It is comprised of a main auditorium with 800 seats and a smaller studio stage with 200 seats.

A Berlin opera house is encouraging audience members to smoke joints during performances of its coming production "The Oriental Princess" to enhance the psychedelic experience of Saint-Saens' drug opera. (Aug. 26, 2005)

Beethoven in Bonn: every autumn the big names and up-and-coming talent of the classical music scene gather in Bonn to pay tribute to the city’s most famous son. The motto of the Beethoven Festival in 2005 is Liberté. (Sept. 8, 2005)

Pamela Rosenberg is set to become the new general director of the Berlin Philharmonic after four years as head of the San Francisco Opera. She'll be returning to the country where she's already spent much of her career. (July 22, 2005)