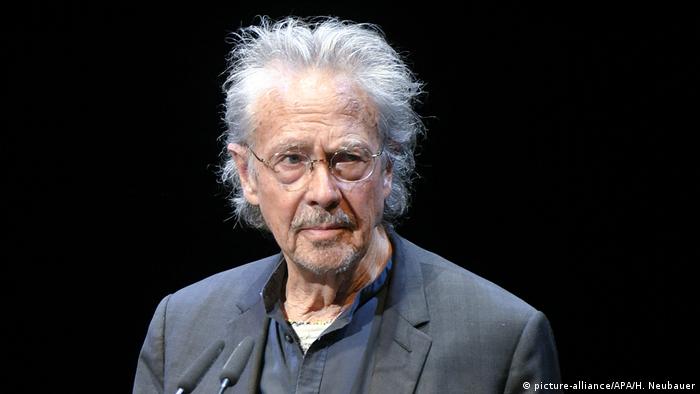 "Everyone is asking questions like you, and no one who comes to me seems to have read anything or know anything that I wrote, all I get is questions: how does the world react, a reaction to a reaction," a surly Handke told journalists during a visit late on Tuesday to his hometown, Griffen, according to a recording by Austria's Ö1public radio broadcaster.

"I am a writer. I am rooted in Tolstoy, I am rooted in Homer, I am rooted in Cervantes — leave me in peace and don't ask me such questions," the 76-year-old Nobel laureate said. According to ORF broadcaster, he vowed never to answer journalists' questions again.

At a meeting with municipal authorities and local politicians, journalists seized the moment to ask Handke for a reaction to remarks Bosnian-German author Sasa Stanisic, the 2019 winner of the annual German Book Prize, made on Monday in Frankfurt.

Stanisic, who was born in Visegrad in 1978 and fled to Germany with his parents in 1992, said he had the good fortune to escape "what Peter Handke fails to describe in his texts." He added that it is "weird that you put the reality in such a way that it consists only of lies," and that it was remiss of Handke not to talk of crimes against humanity.

Handke supported Serbia during the Bosnian Wars (1992-1995), condemned NATO airstrikes and held a speech at the 2006 funeral of former Yugoslav dictator Slobodan Milosevic.

The Swedish Academy's decision to award Handke the 2019 Nobel prize for literature has triggered a heated debate among German newspaper feature writers. International reaction to the Nobel laureate has also been divided.

The decision to award the city of Düsseldorf's prestigious Heine Prize to controversial Austrian author Peter Handke -- known for his pro-Serbian stance during the Balkan wars -- has been met with criticism in Germany. (29.05.2006)