Pedro Castillo has faced criticism over past choices — the previous Cabinet was led by Hector Valer, who resigned following allegations of domestic violence. 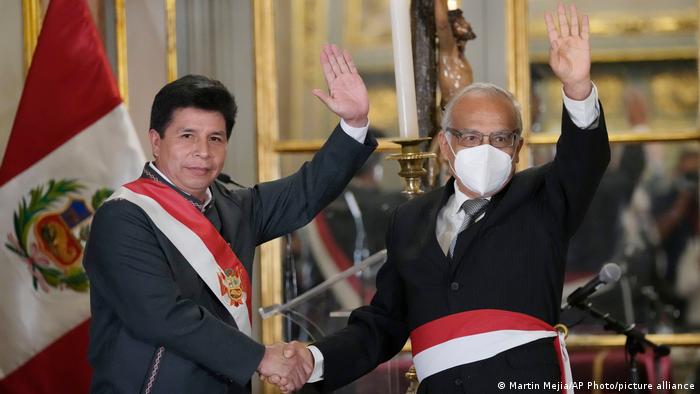 'Yes, I swear,' Anibal Torres (pictured right), a lawyer taking over the role of prime minister, said in a brief ceremony with Peru's President Pedro Castillo

Castillo has faced a string of crises, including attempts to impeach him and growing criticism over his past choices for ministers. The previous Cabinet included a prime minister who lasted just three days.

Who's who in Peru's new Cabinet?

Torres has advocated in favor of moving former President Alberto Fujimori from a special prison to a common prison to serve his 25-year sentence. Fujimori’s daughter was Castillo’s main rival in last year’s presidential elections.

As Peru grapples with the environmental fallout from a mid-January oil spill in the Pacific Ocean, Castillo has replaced an inexperienced geography teacher with nuclear physicist Modesto Montoya as environment minister.

What are the challenges facing the president?

The new Cabinet will have to be confirmed by the opposition-controlled Congress. If it fails to do so, Torres will have to resign and a fifth Cabinet sought. While the president won approval for his first two Cabinets, the third one dissolved before the vote.

In December, the opposition attempted to impeach Castillo on grounds that he was morally unfit for office. The motion, however, failed to garner enough votes in Congress. Critics say Castillo’s inability to retain a Cabinet has led to concerns about him leading a nation.