US and Afghan troops drove an armored vehicle through a closed gate of the Kunduz hospital, the site of the US airstrike on Doctors Without Borders, Pentagon says. The US personnel were on a fact-finding mission. 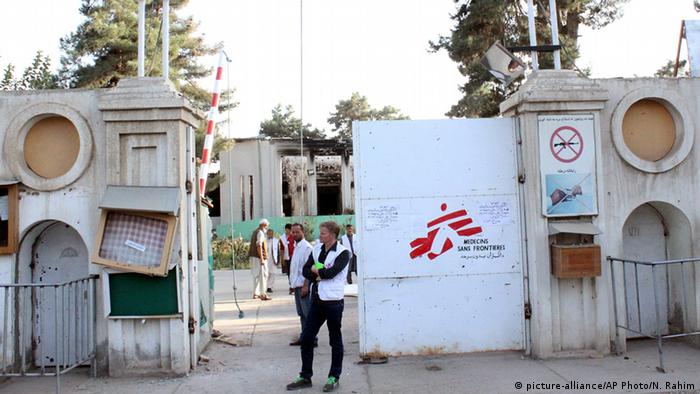 The soldiers forced the gate open last week, believing that no Doctors Without Borders (MSF) members were in the compound, Pentagon spokesman Jeff Davis said Monday.

"They drove into it with their vehicle," Davis said. "They did it. They shouldn't have. They should have coordinated ahead of time, and they're going to make it right and make sure that that gate is repaired."

The US and Afghan troops were on the scene to inspect "structural integrity" of the building, which was damaged in a US bombing earlier this month, he added.

The attack in northern Afghanistan killed 10 patients and 12 MSF staff, with another two MSF members missing and presumed dead.

The military convoy decided not to stop and open the gateway "in the interests of safety" because of recent "shelling and shooting" in the area, according to Davis.

"Unbeknownst to our team there, there were MSF personnel and they were understandably not happy that we had broken that," he said.

The incident last Thursday also violated an agreement stating that MSF needs to be notified of such visits in advance.

There are now at least three separate probes into the deadly airstrike, which prompted the international charity to pull out of Kunduz.

On Monday, Afghanistan's acting defense minister said that militants were using the MSF hospital as a "safe place" and that a Taliban flag had been mounted on one of the building's walls.

"That was a place they wanted to use as a safe place because everybody knows that our security forces and international security forces were very careful not to do anything with a hospital," Masoom Stanekzai told the AP news agency.

The medical charity has repeatedly denied similar claims, claiming that the only Taliban present in the hospital were wounded patients, in accordance with MSF's role.

"Every staff member in Kunduz working for MSF has repeatedly reported to us that there were no armed people in the hospital at the time of the bombing," Kate Stegeman, MSF's communications director in Afghanistan, said Monday.

The group said no staff had reported a Taliban flag on any walls of the compound.

The US president Barack Obama has personally apologized for the strike to Doctors Without Borders president Joanne Liu.

US President Obama called the head of Doctors Without Borders to offer condolences for the airstrike on the group's hospital. While the aid group wants a war crimes inquiry, the White House called the attack an accident. (07.10.2015)