Naked penises are a bit too much for Vienna residents. Placards promoting a major exhibition on the male nude in art history caused such a stir in the Austrian capital that the critical parts have been covered up. 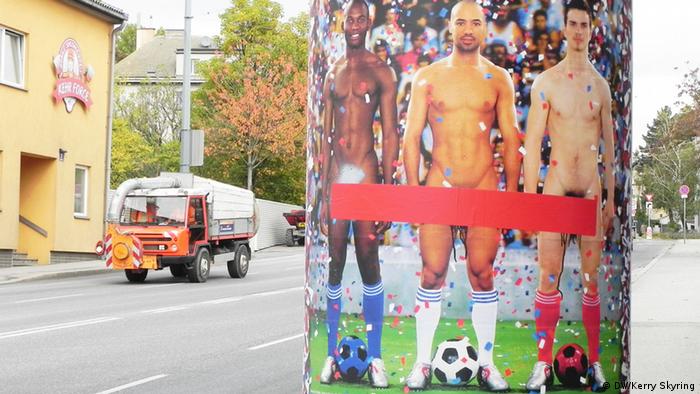 Vienna's Leopold Museum has denied that it was out to shock the city when it chose a full-frontal photo montage of three footballers by French artists Pierre & Gilles to draw crowds to its major exhibition "Nude Men - From 1800 to Today," which opens Friday, October 19.

But it has shocked the conservative Austrian capital, which casts a hint of doubt on the museum's true intentions. Whatever the merits of the exhibition - and there are many - the appendages on placards around the city have garnered publicity that can't be bought. Even the obscuring of the three penises with a red band has only brought extra attention.

"You can't talk about a cheap marketing strategy," said museum director Peter Weinhäupl at a preview of the exhibition, "but we do want to promote a discussion." The museum admits it has had more positive than negative reactions to the poster, but is nevertheless emphasizing the negative.

"One woman threatened to take a brush and paint over the genitals," said a museum spokesperson. There's almost an implied wish that television cameras would capture the act of desecration.

So what about the museum's own cover-up - its modern fig leaf, the red band across the major talking point of the Pierre & Gilles piece? "Well, this can be seen as making it more interesting," said the museum.

Admittedly, only some of the hundreds of posters have been censored. The point of the work, titled "Vive La France" and featuring three soccer stars with different ethnic backgrounds, is meant to be a celebration of France's cultural diversity. 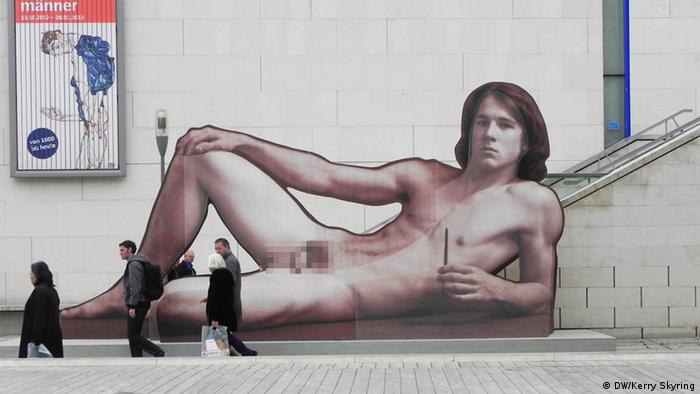 More women than men stop to stare at Mr Big

The curious contradiction to the carefully contrived "outrage" at the French footballer's penis trio lies outside the door to the museum. "Mr Big" is a larger-than-life male sculpture in wood by Austrian artist Ilse Haider. She has her multi-dimensional male nude reclining alongside the stairs leading to the exhibition, inviting young women to pose for each other and laugh at his languid length.

"No comment," say two visitors from Ireland when asked for their thoughts.

The museum says "Mr Big" "is like a children's playground." But it's also a chance to reflect on the "female gaze" as a change from the "male gaze" - the term coined by Laura Mulvey in the 1970's to describe the dominance of men in film making and their impact on the depiction of women.

Indeed, it mainly seems to be women rather than men who stop to stare at "Mr Big." Many laugh and point, and a few take photos of each other posing with him.

And here's where the exhibition outgrows its cheap publicity stunt. Among its 300 works of art there are plenty of "male gaze" images, including the voyeuristic gaze of the homosexual male on the male. Inevitably, Robert Mapplethorpe is represented with "Cock and Jeans," along with works by Andy Warhol, but it's women turning the female gaze on men that gives the exhibition its kick, with "Mr Big" as the, well, biggest example.

Obviously works by female artists are outnumbered by those from male artists, but the exhibition does make an effort to escape charges of sexism.

Louise Bourgeois' "Fillette (Sweeter Version)," a stand-alone penis once censored by New York's Museum of Modern Art, is also in there as an antidote to the male perspective. 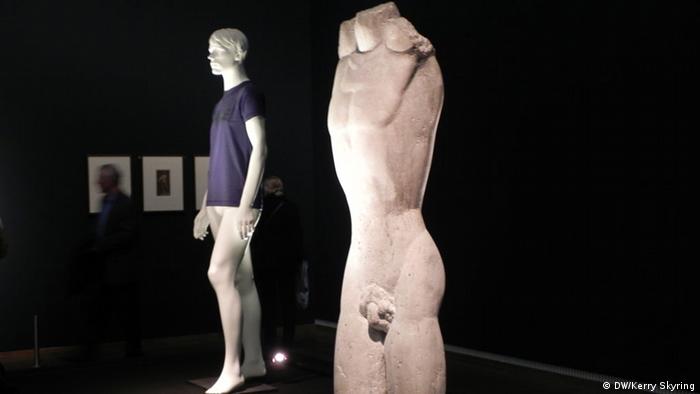 "Torso" by Fritz Wotruba (1930) and "Untitled" by Heimo Zobering

Another obvious question posed by the contrived controversy over the French footballers is why the naked male is so much more controversial than the naked female.

"It has something to do with our becoming accustomed to the images of naked women," said Tobias Natter, defending the decision to first post the placards and then censor them. He pointed to the lack of reaction to a nude female Egyptian figure which led the visual advertising campaign for a major exhibition at Vienna's Art History Museum. "She is completely naked and there is no protest - for 'Nude Men' there is protest - we want to draw attention to this cultural distinction," he said.

The focus of the exhibition is the male nude in western art over the past 200 years, with a glance back to antiquity. The oldest exhibit is a statue of the Egyptian court official Snofruner dating from 2,400 BC. "Nude Men From 1800 to the Present Day" is on show at Vienna's Leopold Museum through January 28, 2013.

One of the most recognized works in art history, Edvard Munch's expressionist masterpiece "The Scream" has set a world record in price, being sold for nearly $120 million at a New York auction. (03.05.2012)

Several priceless paintings have been stolen from the Kunsthal museum in the Dutch city of Rotterdam. With the robbers still at large, the police have launched an investigation into the heist. (16.10.2012)