The same cargo airlines used to bring food and other aid supplies to Africa are also being used in arms smuggling, according to a new report by the Stockholm International Peace Research Institute. 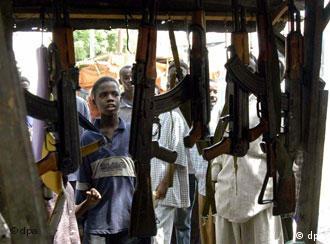 Illegal weapons are a problem in conflict zones

The research group said an investigation had shown that nine out of 10 carriers involved in illicit weapons trading had also been used by the European Union, United Nations agencies, NATO members and other non-profit groups sending aid to Africa.

In addition to arms, questionable transports include illegal drugs, diamonds and other precious minerals, according to the report.

In Sudan, "all companies that have been listed by the UN for illicit arms transfers have been used for humanitarian aid," report co-author Hugh Griffiths told Associated Press. 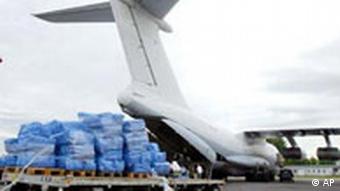 The peace institute called on Europe to take the lead in developing a code of conduct for air cargo transporters. The group recommended the EU use "existing air safety regulations" to put companies involved in illicit activities out of business.

The report called on UN agencies, governments and NGOs to make humanitarian aid and peacekeeping contracts conditional on adherence to an ethical transportation code.

The Swedish parliament created SIPRI as an independent foundation in 1966. SIPRI has for decades tracked global arms spending and publishes regular reports on its findings.

The G20 leaders who recently met in London to discuss the global economic crisis made sure that enough was said about Africa to appease those who had called for the world’s financial powers not to forget the continent. (04.04.2009)

Reactions from world leaders and officials were mixed after the International Criminal Court announced an arrest warrant for Sudanese President Omar al-Bashir on charges of war crimes and crimes against humanity. (05.03.2009)