Pastors Square Off Against Imams -- in a Friendly Way | News and current affairs from Germany and around the world | DW | 05.05.2006

Pastors Square Off Against Imams -- in a Friendly Way

It's hardly a "Clash of Civilizations" but much will be at stake when the Christians take on the Muslims on Saturday. 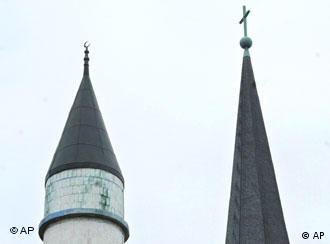 Which side will win?

Before an international panic arises over some organized dust up between two the world's main religions, it should be mentioned that nothing overtly aggressive is planned, just a simple case of 22 men kicking lumps out of each other for the love of the beautiful game. Oh, and the small matter of increasing the peace.

As part of an initiative aimed at increasing understanding among religions, Christian ministers will tackle Muslim imams in a pre-World Cup soccer friendly in Berlin. In an attempt to keep things clean and well represented, the match will be officiated by a Jewish referee. Reports of Buddhist waterboys and Hindu physiotherapists were unconfirmed at the time of publication.

The eight-a-side match is being organized by the German Protestant Church and will take place just over a month before the big World Cup kick-off on June 9.

The friendly match is part of a wider initiative associated with a conference organized by the British Embassy in Berlin on integration, racism and soccer and will be the first such match in Germany, according to the Church of Berlin and Brandenburg.

Churches of different Christian denominations are also organizing a series of events including festivals and concerts under the banner "kickoff2006 - Kick-off Faith," using soccer's global appeal to promote tolerance and unity.

At Geithain in the east of Germany, the Protestant church is also trying to organize a mini-World Cup among 32 churches to mirror the actual event.

Unlike the FIFA-organized World Cup, though, there are no plans for a cartoon mascot.

Greenland vs. Zanzibar: Passion Returns to the Pitch

Originally a soccer celebration, the World Cup has become a money-making festival where profits come before fans and players. But a mini-Cup in Hamburg focuses on the beautiful game -- pitting Tibet against Gibraltar. (May 2, 2006)

Battle of the Sexes Takes to the Soccer Field

Just before the start of the 2006 Germany soccer World Cup, film maker Ute Wieland has raised the stakes -- and played on all the stereotypes in the book -- in the battle fight of boys against girls in his movie FC Venus, which premiers in Hamburg on Thursday. (April 27, 2006)

Cashing in on the Lucrative "Soccer Widows" Market

While soccer fans prepare for the month-long extravaganza that is the World Cup, many of their unenthusiastic partners are considering fleeing the soccer madness and finding companies willing to help them escape. (April 28, 2006)