The world gymnastics federation FIG wants to add the growing parkour discipline to its remit, in time for Olympic inclusion in 2024. Yet parkour groups are fighting the bid tooth and nail, saying #WeAreNOTGymnastics. 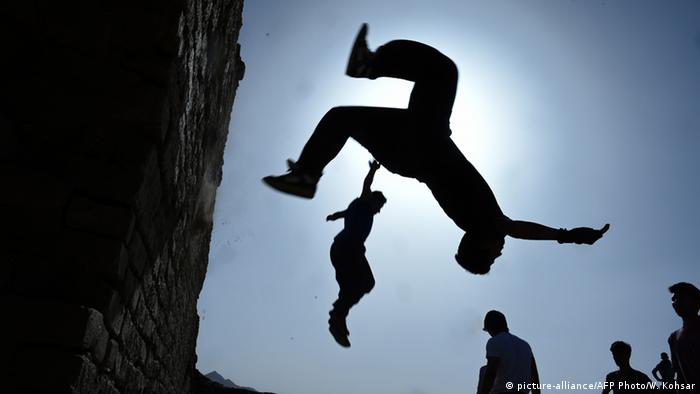 Snowboarding, freestyle BMX biking, skateboarding, and now perhaps parkour: The Olympics has been consciously trying to bring youthful niche sports into the fold in recent years, in no small part with an eye on the future.

To this end, the global gymnastics federation FIG plans to bring parkour under its remit with a view to making the sport a gymnastics discipline at the 2024 Olympics. FIG members will vote on the matter at their annual conference in Baku, Azerbaijan, on December 2 and 3. If two-thirds of members vote in favor, at least by the FIG's rules, the deal would be done.

Yet the vote's going ahead despite severe resistance from a series of existing Parkour organizations, which claim that the FIG is trying to "usurp" a growing sport against the wishes of its practitioners.

An open letter from Parkour UK describes the move as, "the encroachment, misappropriation and the attempt to usurp Parkour as a 'discipline' of Gymnastics under the auspices for the FIG." It adds that the organizers "will not allow our sport to be to be encroached, misappropriated and usurped unilaterally by another sport against our […] will."

The letter urges British Gymnastics to vote against the move, or abstain, at the summit in Baku.

Parkour UK is the nationally-recognized governing body for the freerunning discipline in the UK, which last year became the first country to recognize Parkour as a sport.

A quartet of representatives for parkour on a special FIG committee working on the uneasy marriage resigned in protest last month. They said that while they supported the idea of teaming up with the FIG in theory, "the implementation is trying to go fast with very little or no transparency, no involvement of the international parkour community or national communities." The FIG did not respond and the plans for the merger continue, even as the committee led by French parkour pioneer and actor David Belle continues to shrink.

Eugene Minogue, CEO of Parkour UK and Parkour Earth, told DW that gymnastics is by definition an indoor sport, and parkour is an outdoor one.

"If the vote is carried and it gets the two-thirds majority, Parkour Earth will have no choice but to launch a European competition complaint with the European Commission," Minogue told DW.

There's been resistance to the plans from within the parkour scene for over a year, but it's coming to a head with the FIG vote approaching. Popular "hash tags" on social media for opponents include #WeAreNOTGymnastics and #FightTheFIG. Organizations in several countries including France, Denmark, Australia and New Zealand have lodged letters of protest.

Australia's parkour body even argued that it was concerned about taking Olympic places away from Australian gymnasts in other disciplines in its letter resisting the FIG plan.

The International Olympic Committee (IOC) wants to reframe the Olympic Games as more youth-focused, appealing to a greater number of women and with an increased urban audience, Minogue said.

Adding parkour as an Olympic sport would help the IOC reach this goal, and hosting parkour events would be cheaper than more traditional sports because host cities would be able to use the existing urban landscape rather than having to build expensive new stadiums.

Parkour began in France in the 1980s, when it was known as the art du deplacement (art of movement), and later took its name from the French word 'parcours' (course). Its inclusion in hit Hollywood blockbusters like Bond film Casino Royale and The Bourne Legacy in recent years helped boost its public profile.

While resistant to FIG adoption, Parkours enthusiasts appear more divided on the idea of eventual inclusion in the Olympics. Some argue that the sport was never supposed to be competitive in nature, while others think the exposure would help the discipline grow.