Paris official reassures public about Notre Dame health risks after lead scare | News and current affairs from Germany and around the world | DW | 06.08.2019

Paris' deputy mayor has spoken out about rising concerns of lead poisoning surrounding Notre Dame after a massive blaze melted significant parts of the cathedral. "The city is not going to take any risks," he said. 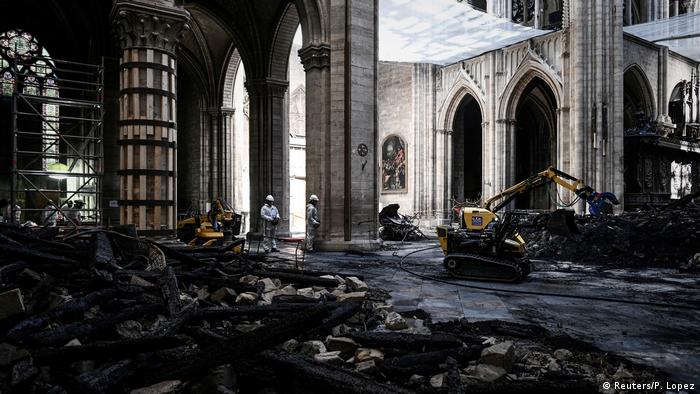 Construction work at Notre Dame was ceased on July 25 after officials discovered that anti-contamination procedures were insufficient.

The number of children tested for lead levels in Paris has doubled since July. Six of the new children tested are in the "alertness threshold" and one surpasses the threshold for obligatory reporting of lead poisoning.

Despite tests continuing to show concerning levels of the toxic metal at surrounding schools, Gregoire tried to ease public distress about health hazards.

"All the tests we've carried out in a radius of 500 meters around Notre-Dame are negative, meaning there is no danger," Gregoire said. If necessary, the reopening of schools after the summer holidays could be delayed, he said — albeit stressing that this was only a worst-case scenario.

The six children requiring further monitoring had between 25-50 micrograms of lead per liter of blood, while one child exceeded 50.

That child attends a Parisian primary school that closed at the end of July due to high lead concentrations on its grounds. It remains unclear whether the high level of lead in his system was a result of the pollution caused by the fire.

How did the lead spread?

Lead particles were released within the smoke as hundreds of tons of lead in the Notre Dame roof and steeple melted during the massive blaze and consequently settled on nearby streets and buildings in particulate form.

Construction work at Notre Dame ceased on July 25 after officials discovered that anti-contamination procedures were insufficient to keep the lead from spreading. Work is only expected to resume next week.

However, parts of central Paris have seen far-surpassed levels of lead since the iconic cathedral caught fire on April 15, 2019.

Who is at risk?

Lead poisoning can be a threat in particular to pregnant women and can be fatal to young children, who are more likely to touch contaminated objects and then insert their fingers into their mouths.

The World Health Organization warns that "there is no known safe blood lead concentration," noting that even low concentrations once considered safe can have long-term adverse health effects.

The deputy mayor had rejected some requests from residents and parent associations to cover the whole of the Notre Dame site with protective cladding in an attempt to contain the lead particles.

"From a technical and financial point of view, such a move would be an incredibly complex decision to carry out," Gregoire said.

However, Gregoire declared that the sites would be "rigorously cleaned" and approved by the ARS, the regional health agency, before the school year recommences in September.

An environmental NGO consequently filed a law suit, alleging that officials failed to contain the contamination and that subsequent health threats could arise from toxic lead.

Some locals accused officials of not notifying the public about the test results.