Five classic paintings, including a Picasso, were stolen from the National Museum of Modern Art in Paris on Thursday. The lost pieces together have a value of some 500 million euros. 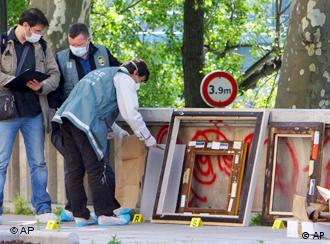 Police remain baffled by the theft

A lone thief in Paris has made away with five classic works of early 20th century art on Wednesday night, including works by Picasso and Matisse, in what Paris mayor Bertrand Delanoe has called "an intolerable attack on the universal cultural heritage in Paris."

The five pieces were stolen in an overnight heist from the National Museum of Modern Art. Museum staff discovered the paintings were missing when they opened their doors on Thursday morning.

The thief apparently broke into the museum through a window. Investigators have cordoned off the museum, which is located across the Seine River from the Eiffel Tower in one of the city's most tourist-frequented areas.

Police said earlier that the paintings were worth about 500 million euros ($617 million), but art experts have since disputed that claim.

"The Picasso might be worth 40 to 50 million euros, the Braque 10 to 20," said Didier Rykner, editor of the specialist magazine The Art Tribune.

"But in any case, we're talking about a theoretical value, they don't have a market value, because you couldn't openly sell them. They're too well known."

Museum officials have now valued the stolen paintings at about 100 million euros ($123.7 million).

Some 50,000 art thefts are reported each year and nearly all involve organized criminals. The majority of works are never found, but an Italian organization has sent out a plea for a painting stolen over 40 years ago. (17.05.2010)

Yet again, two works by Edvard Munch have been reported stolen, but by now, that's practically become old hat. An art detective agency explains why Munch thefts get so much attention, and how they can be found again. (19.11.2009)