Somare, known as the "father of the nation," died after a short battle with pancreatic cancer. He was instrumental in establishing the island nation's independence from Australia. 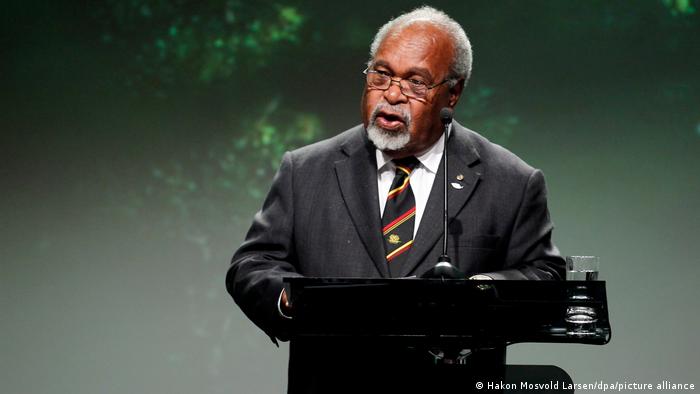 Michael Somare speaks during the Oslo Climate and Forest Conference in Oslo, Norway in 2010

Papua New Guinea's first prime minister, Michael Somare, died at the age of 84 after a battle with pancreatic cancer on Friday.

Somare, a pivotal figure in the South Pacific island nation's independence movement, was also known as the "the Chief" and "father of the nation." Somare led Papua New Guinea to independence from Australia in 1975, and was prime minister for a total of 17 years, during three separate terms.

"Our nation honors this Great Leader," Prime Minister James Marape said in a statement, calling for "a week of silence, peace and calm" to pay respect to "this one person whom our country owes much."

"He is unmatched by anyone of us who comes after him," said Marape. "He is universally loved in our country, may his memory bind our nation still."

Somare was diagnosed with a late-stage pancreatic cancer and admitted to a hospital on Feb. 19, his daughter Betha Somare said.

"Sir Michael was a loyal husband to our mother and great father first to her children, then grandchildren and great granddaughter. But we are endeared that many Papua New Guineans equally embraced Sir Michael as father and grandfather," she said.

Half a century in parliament

Somare, the predominant figure in Papua New Guinean politics, only stepped back from politics in 2017, after 49 years as a member of parliament.

"I practice national unity and I am proud to be called the father of the nation," Somare said when he retired.

"To this generation of Papua New Guinea, I thank you all for your love and protection, I gave my best years to this country by serving as a politician, I hope each one of you will also contribute to our country."

His passing was expected to spur an emotional outpouring in the nation, which has more than 800 languages, a number of tribal groups and some of the highest levels of poverty in the Asia-Pacific region.

Somare is expected to be buried in his home village, East Sepik, in the coming days. Before moving into politics, he worked as a school teacher and a state radio broadcaster.

While studying in university, he helped found the nationalistic Papua New Guinea Union Party (PANGU) in 1967 before winning election to parliament in 1968. He became chief minister in 1972, and later prime minister in 1975. He was later re-elected and again served as prime minister from 1982-1985 and from 2002 until 2011. 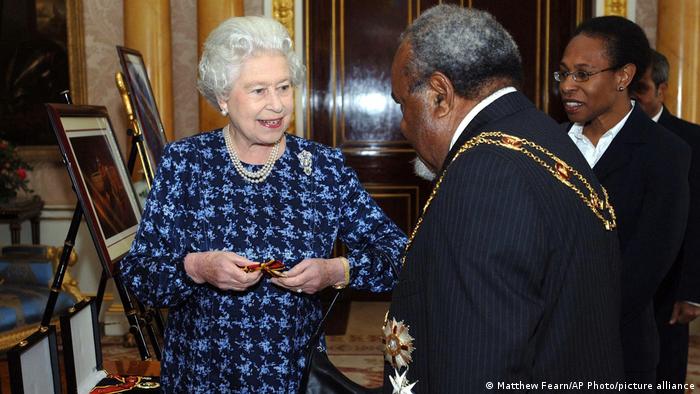 In his final term, Somare presented Queen Elizabeth II with PNG's Sovereign's Badge of the Order of Logohu

Morrison lamented the loss of "a towering figure in the history of Papua New Guinea."

"He was a vital partner who staunchly defended Papua New Guinea's independence, but always appreciated Australia's unstinting commitment to his country," he said.

Morrison tweeted that Somare was also a "great friend to Australia."

Australia is Papua New Guinea's biggest aid donor and most recent former colonial power. Britain, Germany, the Netherlands and Japan all controlled parts of the country at times prior to World War I.

Ardern said Somare had been an "influential figure" during a "remarkable five decades" in Parliament. "He is widely respected as Papua New Guinea's 'Papa blo Kantri' — Father of the Nation — and had a leadership role as a statesman of the Pacific," Ardern said. "He will be deeply missed.''

Australia has requested for one million doses from the EU and AstraZeneca to control the outbreak in Papua New Guinea. While the numbers are low, officials believe actual cases to be much higher.

New Zealand slams Australia for stripping IS detainee of citizenship 16.02.2021