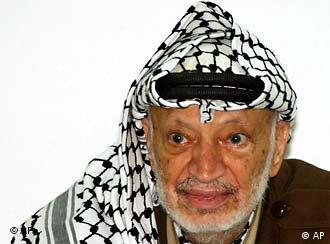 Yasser Arafat's involvement in his people's struggle is over

Yasser Arafat, the 75-year-old Palestinian leader, was determined to be clinically dead in a French military hospital in the early hours of Thursday morning. Arafat was being treated there for an unknown illness.

The frail head of the Palestinian Authority arrived in Paris last week after losing consciousness briefly at his West Bank headquarters. Arafat was at first said to have been suffering from a severe case of influenza, but was later diagnosed as having blood abnormalities and trouble with digestion.

Palestinian officials then ran tests for leukemia but the cancer was ruled out, and doctors remained uncertain what was causing his illness. Radical wings of his Fatah movement continue to claim Arafat was poisoned but medical tests have shown no evidence to support that. Arafat's condition worsened three days ago and he slipped into a coma on Wednesday.

Born in Cairo in 1929, Yasser Arafat preferred to claim Jerusalem as his birthplace. He became politically active as a 19-year-old engineering student in Egypt in 1948, when the Arab countries that declared war on the fledgling state of Israel were defeated and thousands of Palestinians forced to flee their homes as a result.

Founder of the Fatah movement

Arafat and a small group of supporters founded the Fatah movement in Kuwait in 1959. Five years later, the Palestinian Liberation Organization (PLO) was established by Arab governments claiming to represent Palestinian interests.

Shortly after this came a turning point in Palestinian history. Tensions between Israel and its Arab neighbors culminated in 1967 in the Six Day War, by the end of which Israeli forces had occupied East Jerusalem and the West Bank -- which until then had been administered by Jordan -- as well as the Gaza Strip and the Golan Heights.

President of the PLO

Fatah joined the PLO, and Arafat became president of the organization in 1969, a position he held for the rest of his life. He became a hero to many Palestinians by personally rallying resistance in the West Bank and organizing attacks against Israelis. The PLO was forced to shift its base from Jordan to Lebanon in 1970, and in 1982, when Israel invaded Lebanon, it set up headquarters in Tunis.

During the 1970s and '80s, the PLO and other affiliated groups attracted international attention with a series of terrorist acts and violent hijackings. These included the murder of eleven Israeli athletes at the Munich Olympics in 1972, the hijacking of a French airliner in Entebbe in 1976, and of the Achille Lauro cruise ship in 1985.

But exiled in Tunisia, Arafat began to lose his grip on the Palestinian territories. Militant Islamist groups like Hamas appeared to fill the void. In 1987, the Palestinians themselves started a civil uprising or "intifada" against the Israeli occupation, for which Arafat managed to take much of the credit.

Head of the self-proclaimed independent state 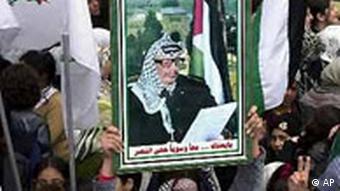 In 1988 the PLO unilaterally declared an independent Palestinian state with Arafat as its president, but real progress towards this goal only began a few years later, when Arafat, under international pressure, finally acknowledged Israel’s right to exist and declared that the PLO would distance itself from terrorism.

The PLO was then invited to observe the Middle East peace talks in Madrid in 1991, and secret negotiations led to the triumphant signing of the Oslo Peace Accords in 1993. Arafat and the PLO were allowed to return to the occupied territories and set up an autonomous administration. In 1994, Arafat shared the Nobel Peace Prize with his Israeli counterpart, Yitzhak Rabin. 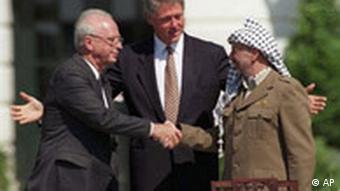 But the peace process ground to a halt when Yitzhak Rabin was murdered the following year, and his successor, Benjamin Netanyahu, stalled the implementation of the Oslo agreement. In 2000, new Israeli premier Ehud Barak met Arafat at the ill-fated Camp David summit to negotiate the boundaries of a Palestinian state.

Many believe that Arafat’s decision to reject Barak’s offer outright without making a counter-proposal was his biggest political mistake; but his refusal to compromise meant he returned home to a hero’s welcome, albeit empty-handed.

Shortly afterwards, in September 2000, the second intifada broke out. Although Arafat officially condemned acts of terrorism, including Palestinian suicide bombings and attacks against civilians, the Israeli government under hardliner Ariel Sharon held him responsible, and isolated him within his compound in Ramallah for nearly two and a half years.

Arafat continued to defy not only Israel but also Parkinson’s disease, power struggles within the PLO and repeated accusations of corruption. He remained the undisputed leader of the Palestinian people, a symbolic figure who maintained an iron grip on power, thus ensuring that his is an act it will be difficult, if not impossible, to follow.

Israel's announcement that it would "remove" Palestinian leader Yasser Arafat has met with international criticism everywhere from the U.S. State Department to the office of French President Jacques Chirac. (September 12, 2003)

Time for a Change in Palestinian Leadership?

Ailing Palestinian leader Yasser Arafat has been flown to Paris for medical treatment. Even if he regains his health, his political life seems to have reached its end, said a leading German politician. (October 29, 2004)

A prominent Palestinian leader, Saeb Erekat, has died from complications related to the coronavirus. He was 65. For decades, he had been a Palestinian chief negotiator in a peace process that has since stalled.

Palestinians in villages in the West Bank have voted in municipal polls amid a boycott by the main opposition Hamas. The Islamist group is protesting against the indefinite postponement of a general election.