An apparent suicide bombing has targeted a politician ahead of Pakistan's elections. The party hit by the blast has been targeted for its opposition to the Taliban. 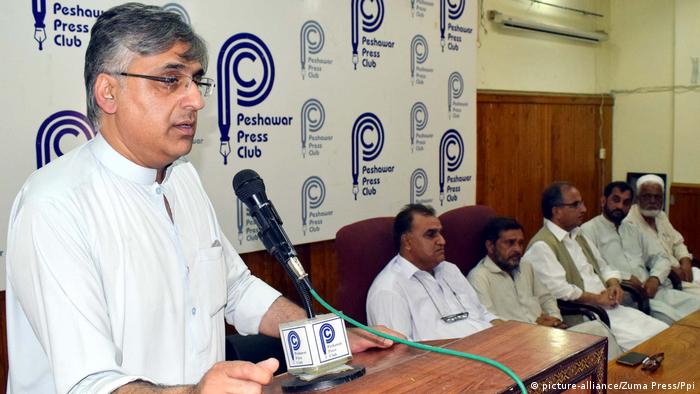 Authorities in Pakistan say a suicide bomb attack killed at least 13 people and injured at least 54 others in a blast at a political rally in the northwestern city of Peshawar on Tuesday. Haroon Bilour, a candidate for the Awami National Party (ANP), which has been the target of Islamist militants for its opposition to groups such as the Taliban, was killed in the attack.

Read more: Pakistan: Will general elections be held on time?

The attacker struck when Bilour was about to address some 200 supporters.

Haroon Bilour was the son of senior ANP politician Bashir Ahmed Bilour, who was killed in a 2012 suicide attack in Peshawar carried out by the Taliban Movement of Pakistan (TTP). Haroon Bilour's 16-year-old son Daniyal was among those seriously injured in Tuesday's attack.

Imran Khan, the chairman and presidential candidate of the Pakistan Movement for Justice party (PTI), took to Twitter to convey his condolences. He went on to "strongly condemn the terrorist attack" adding, "all candidates must be provided security during their election campaigns by the State."

Pakistan's general election will be held on Wednesday, July 25.

Clashes have broken out between police and protesters and the ousted prime minister has called on his supporters to remain in Islamabad until fresh elections are held.

Islamabad has come under heavy criticism for "giving concessions" to the Tehrik-e-Taliban Pakistan, which killed 132 children in Peshawar in 2014. Imran Khan's government is currently negotiating with the militant group.

Shahbaz Sharif is the younger brother of Nawaz Sharif, who was prime minister three times before. His victory was secured when members of the opposition party of ousted Prime Minister Imran Khan resigned.