Rio de Janeiro's largest favela, Rocinha, has been pacified by military police in preparation for the 2014 World Cup and 2016 Olympics. But much remains to be done to improve the lives of those living in the community. 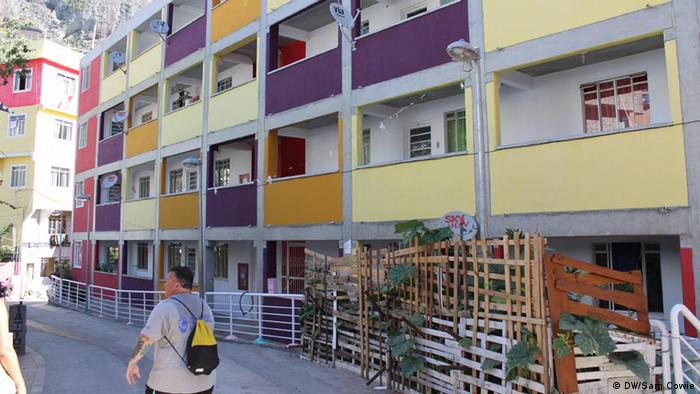 Rocinha's colorful Rua 4 neighborhood was once a murky alley

On a Saturday afternoon in favela Rocinha, Rio de Janiero, a large crowd gathers in the courtyard of a local church to welcome Dom Orani Tempesta, archbishop of the self proclaimed 'Cidade Maravilhosa' - Rio's nickname which translates to "marvelous city."

As the archbishop enters the church under a hail of confetti, a black pickup truck passes outside, heading up Rocinha's steep and winding hillside roads. The men in the back of the truck are carrying high calibre assault rifles. Until November 2011, the archbishop had never set foot in Rocinha.

Rocinha's residents have seen heavily armed young men moving freely around the community since the drug trade took hold of the neighbourhood some 30 years ago. However, they usually wear flip flops or sneakers, football shirts and gaudy jewellery. 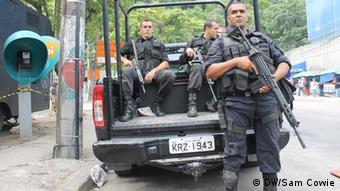 The new men patrolling the community wear combat boots, body armor and an all black uniform that bears the emblem of a skull impaled by a dagger on the left sleeve. They are members of Batalhao de Operacoes Policiais Especiais (BOPE), Rio's highly trained special forces police.

"At the moment the place is in a disorganized state because of the invasion. There's a little uncertainty," said resident and mother of two, Marcia.

Rocinha is Rio de Janeiro's and South America's largest favela - one square kilometer (0.4 square miles) of sprawling brick work with an estimated population of 120,000 to 200,000.

November 13, 2011 saw more than 3,000 troops enter Rocinha, driving out and arresting gang members and seizing tons of drugs and weapons, the latest chapter of the attempted city clean-up operation ahead of the 2014 football world cup and the 2016 Olympics.

There were no casualties or shots fired. The mission, the latest of the favela police pacification schemes was considered a huge success.

Has crime simply moved to other areas?

While favelas with police pacification units or UPP's have seen dramatic drops in violent crime, critics say that criminals merely move into other neighbourhoods. But the authorities, including state secretariat Jose Marino Beltrame, who pioneered the UPP concept, say the scheme is successful.

Rocinha is currently occupied by BOPE troops, who are expected to leave by March. After, regular police will enter and remain for an indefinite period of time.

The police officers who can be seen patrolling, and the archbishop are not the only new faces in Rocinha. The favela's newly enforced, albeit uncertain security blanket, has welcomed a fresh swathe of investors and entrepreneurs. Currently there are over 6,000 businesses in Rocinha, only 8 percent of which are formally taxed. 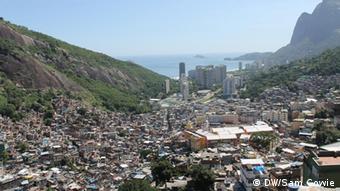 Days after Rocinha's invasion, salesmen from Sky TV sold their first subscriptions in the favela. Recent community meetings have been overrun by outsiders, suspected of trying to benefit from the changes and get a piece of the new Rocinha.

"You had a lot of people who couldn't get in here before because of the drug trade," said Marcos Burgos, who runs Mundo Real, an NGO that follows development issues inside Rocinha.

"People have been exploiting Rocinha for decades, not just trafficking drugs. With the UPP comes a more legitimate kind of exploitation," he added, saying that all kinds of organizations and companies are trying to get in now.

"But some would say, as with the Sky case, they're just meeting demand. The community wanted better television."

Rocinha is located right next to some of Rio's priciest neighbourhoods, Sao Conrado and Gavea, yet the favela ranks among the lowest on the the Human Development Index by district in the city.

The open sewer around the favela's periphery is a huge health hazard and the most common complaint of the community. Health care issues are also a problem with Rocinha's two small health clinics, which are unable to match the vast demands imposed on them.

Education is another critical issue. Adult literacy rates on par with Brazil's national average at 90 percent, but only around 1 percent of inhabitants hold more than a high school diploma.

"It's imperative that the community mobilizes to demand better rights around certain issues," said Seu Martins, who works for the Bento Rubiao foundation and whose main duties are securing land rights for slum dwellers. "The drug trade hindered this process in the past." 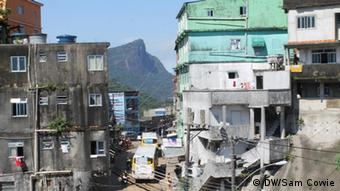 Houses stacked on top of each other are common in Rocinha

"Rocinha needs land tenure, for people to protect their land titles for speculation in the future," Martin said.

"We need improved sanitation, roads and alleyways widened to allow easier access for the old and disabled. And a good education is needed for everyone."

Rocinha has seen direct investment from the government in the past. It was one of five favelas in 2007 to receive money from the federal funded Programme for Accelerated growth (PAC).

Under this initiative the neighbourhood of Rua 4 saw an intense regeneration, which widened the 60-centimeter-alley, once home to the worst rates of tuberculosis in the state, to 12 meters and relocated the residents in public housing nearby.

At the same time, only around 65 percent of the projects started under PAC1 have been finished. O Globo newspaper announced in July 2011 that all projects in Rocinha would be put on hold, because they had gone over budget. This includes the day care center, which remains boarded up.

Rocinha residents have expressed concerns regarding poor planning and diverted funds. All over the country, Brazil recovered only 15 percent of diverted public funds last year.

In addition to mismanaged public funds, the community also has other, more direct concerns. The history of their relationship with the police makes interaction and trust virtually nonexistent for Rocinha's residents. 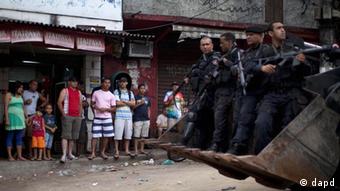 Rio's police killed one person for every 23 they arrested in 2008, many of whom were favela dwellers, according to a report by Human Rights Watch. Amnesty International has condemned BOPE's tactics when entering a favela as "excessively aggressive."

"We don't like them here," said Wesley, a local restaurant worker. "They don't say hello, good morning, they're totally closed. They look at you like a criminal and assume you support drug trafficking if you don't like them. Things were bad when the dealers were here, but nobody was abused."

Since the occupation there have been other internal security issues - Ricardo Eletro, a chain electrics store was robbed at gunpoint. Under the drug traffickers rule, robbery was punishable by death or by severe beating. There have also been several fights, with two resultant deaths.

"I don't feel as safe as I did before. I feel that I have to lock my door now," said one resident who asked to remain anonymous.

Whatever achievements have been realized so far during Rocinha's occupation, it is clear that many more challenges lie ahead.

Brazil is set to host the 2016 Olympic Games, and is investing heavily in infrastructure and security to makes its streets cleaner and safer. New environment programs too could help lift people out of poverty. (04.01.2011)

Brazil eager to be a force of change and moderation

Brazil's Dilma Rousseff took over in the president's office from her mentor, Luis Inácio "Lula" da Silvia, on New Year's Day. She has big shoes to fill as she tries to emulate her predecessor. (30.12.2010)

One of Asia's biggest slums in the Indian financial capital of Mumbai is becoming a tourist destination. Though tour operators say they help dispel myths about slum life, some residents see them as exploitative. (28.01.2010)

Listen to the report on Rio de Janeiro slums