The company that makes OxyContin says it will no longer market opioids to doctors. The drugmaker is fighting hundreds of lawsuits accusing it of using deceptive methods to sell the addictive painkiller. 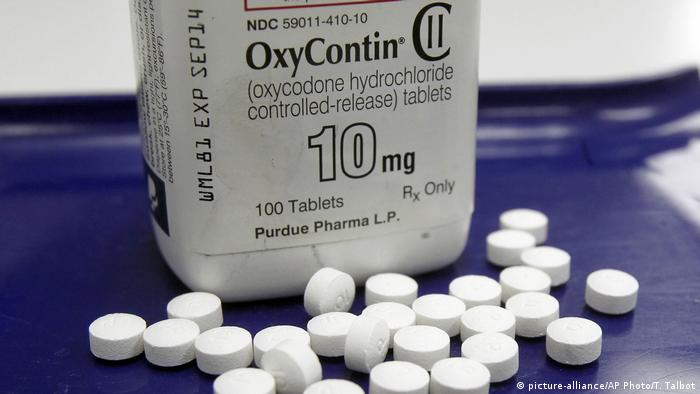 OxyContin maker Purdue Pharma LP said on Saturday that it had slashed half its sales force and would stop dispatching sales representatives to physicians' offices to discuss its opioid drugs.

"We have restructured and significantly reduced our commercial operation and will no longer be promoting opioids to prescribers," the company said in a statement. It added that its remaining 200 sales staff would focus on other non-opioid medication.

Purdue has been accused of pushing OxyContin through misleading marketing that exaggerates the opioid's pain-relieving benefits while downplaying the risk of addiction.

The prescription pill is the world's top-selling opioid painkiller and has raked in billions for Purdue since it was introduced in 1996. But drug abusers quickly discovered they could snort or inject crushed pills to induce a heroin-like high.

Read more: US opioid crisis leaves heroin users out in the cold

WorldLink: The mom who took on America's opioid epidemic

In recent years, several US states, counties and cities have mounted legal cases accusing prescription drug companies of helping to drive a devastating opioid overdose epidemic in the United States.

At least 14 states have sued Purdue. It is also facing a federal investigation by the US Attorney's Office in Connecticut, where the company is based.

Purdue has denied the allegations, stating that its drugs are approved by the US Food and Drug Administration and account for only 2 percent of all opioid prescriptions. In 2007, however, the company agreed to pay $634.5 million (€518 million) after pleading guilty to federal charges related to misleading the public about the risks of OxyContin.

Andrew Kolodny, director of opioid policy research at Brandeis University in Massachusetts, told the Associated Press that although Purdue's decision to stop marketing the drug is helpful, it won't make a major difference unless other opioid drug companies follow suit.

"It is difficult to promote more cautious prescribing to the medical community because opioid manufacturers promote opioid use," he said.

According to the US Centers for Disease Control and Prevention, more than 42,000 people died from opioid-related overdoses in 2016. That's about 115 deaths per day. Most opioid deaths involve illicit drugs such as heroin.

A medical examiner said the pop icon Prince died of an accidental painkiller overdose. Traces of the opioid fentanyl, considerably more potent than morphine, was found in his body. (02.06.2016)