Out is In Among German Politicians

Guido Westerwelle, the leader of Germany's neoliberal Free Democratic Party, has appeared in public with his boyfriend for the first time. It's not a career-damaging move, as other leading German politicians have proven. 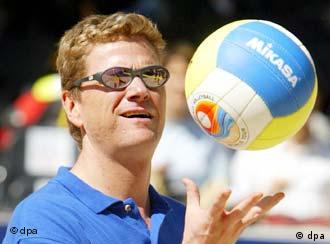 Westerwelle: "I live my life and that's all I'm going to say"

Always on the look-out for juicy stories to fill the summer news hole, editors at Germany's mass tabloid Bild got lucky on Tuesday: They came across a picture of two men in suits, talking to each other during the 50th birthday celebration for German opposition leader Angela Merkel.

One of the men was Guido Westerwelle, who reportedly aspires to become Germany's next foreign minister should a center-right government rule the country after the 2006 elections. The other was Michael Mronz, the executive director of an equestrian festival.

"Westerwelle loves this man," read Bild's front-page headline the following day. While neither of the men confirmed the relationship, they didn't deny it, either. "I live my life and that's all I'm saying," Westerwelle told reporters.

"How gay is Germany," asked Bild on the cover of its Thursday edition in response -- completing the package with a story on whether homosexuality is genetic and a commentary on why gay men are a woman's best friends. 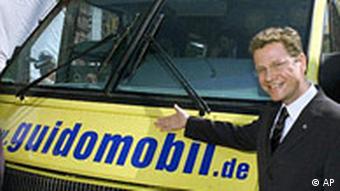 During the 2002 elections, Westerwelle toured Germany with an RV called "Guidomobil" and called his party "Fun Party." Both the mobile home and the term have since been retired

High-brow papers followed suit on Thursday, delving into Westerwelle's apparent decision to end the secrecy surrounding his sexuality. They pointed out that the FDP leader had been dropping hints for a while, accepting his inclusion in a book about gay celebrities and making ambiguous statements in interviews.

Careful observers might have also noticed that Westerwelle has included Madonna's Web site as one of his favorite links on his own home page.

The Berliner Zeitung wondered whether Westerwelle's semi-voluntary outing was a way to clear out the private closet before possibly joining a CDU-led government as a cabinet minister. It added that the public introduction of his boyfriend might also win him sympathy points with voters, many of whom see him as a cold careerist who is pushing for harsh and painful reforms of Germany's social welfare state.

"He might have thought that he could revise this image by following the example of Klaus Wowereit and Ole von Beust," the daily wrote. "The mayors of Berlin and Hamburg have proven that being openly gay boosts rather than hurts popularity ratings." 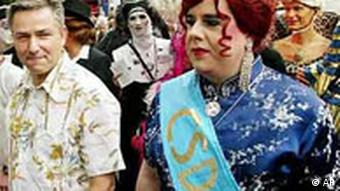 Klaus Wowereit (left) during the 2004 Gay Pride Parade in Berlin

Both Wowereit (photo), a Social Democrat, and Beust, a Christian Democrat, won elections after their homosexuality became publicly known.

"They score with voters because of their openness," Lothar Probst, a political scientist at Bremen University, told Bild. "Those who discriminate against gay people on the other hand move themselves into the fringes of society."

During a 2001 televised speech prior to his election as mayor, Wowereit famously said: "I'm gay and that's just fine."

He has since become Germany's most prominent gay politician, participating in Berlin's pride parade and other gay events. Most recently, Wowereit and his partner officially welcomed newly elected German President Horst Köhler and his wife for an inaugural dinner. 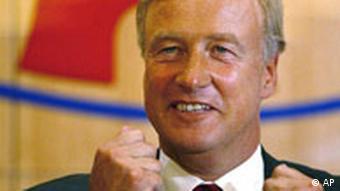 Beust's public outing in 2003 was not quite as voluntary: Ronald Schill, a right-extremist cabinet member had threatened to expose the Hamburg mayor's homosexuality, prompting Beust (photo) to fire him -- and go on to win an unprecedented absolute majority in elections last February.

Schill plans to emigrate to South America in the fall.

While some politicians in the US want to clamp down on rights for homosexuals, Germany is considering expanding them. A new law including changes on the adoption right for homosexuals has been proposed for 2005. (July 18, 2004)

Berlin is gearing up for the celebration of gay culture known as Christopher Street Day. The capital has long been known as a center for Germany's homosexual community, as documented in the city's Gay Museum. (June 21, 2004)

Guido Westerwelle: The FDP's Man Behind the Wheel

Guido Westerwelle has shaped himself in the model of the young, dynamic, upwardly mobile politician. In Germany, he's as well known for his media pranks and political gags as he is for his politics. (Aug. 11, 2004)